The news you heard is true – Third Day are performing their final tour in 2018. They’ll be going out with a bang with a show at Colorado’s Red Rocks Amphitheater on Wednesday 27th June 2018 – the band are guaranteed to pull out the stops for what promises to be a show that will go down in history. No fan can afford to miss it!! Grab those tickets QUICK, before they sell out!! 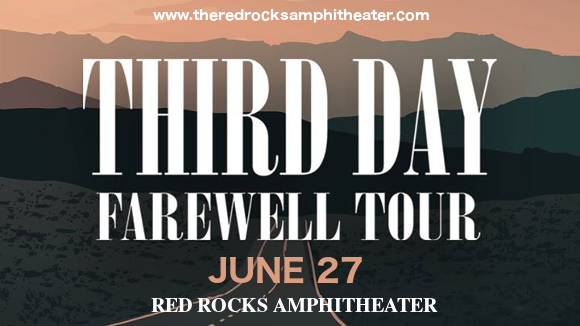 After years together, long-standing Southern rock band Third Day are bringing their days as a band to an end with one final tour. “We never thought we were going to be a band this long. It’s kind of crazy. Time flies by,” admitted singer Mac Powell. “We used to just think, ‘Man, if we could make a couple records, how awesome would that be?’ Now here we are 25 plus years later. There’s been a lot of great experiences. Looking back on it, we’re very grateful for what we’ve been given and very thankful for our fans. That’s why we’re doing this – to say ‘thank you’ one more time to our fans.”

What are you waiting for?? Those tickets aren’t going to hang around – grab yours NOW while you have the chance!!