Ricky, Julian and Bubbles are on the run, and they're heading to to Red Rocks Amphitheater on Wednesday 30th August 2017! What should be an intimate evening with the Trailer Park Boys quickly turns to chaos as the troubling trio embark on a mission to get as drunk, high and partyfied as possible before the cops inevitably catch up with them – it's gonna be wild! 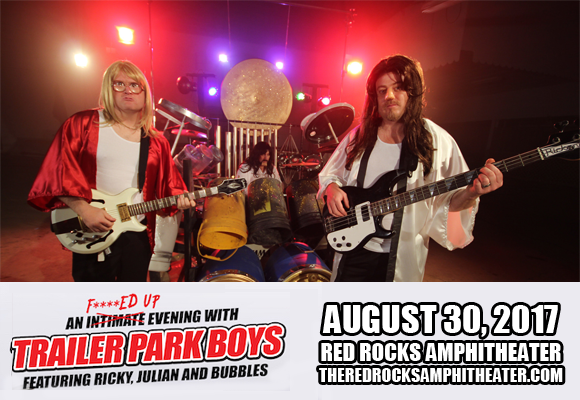 Created and directed by Mike Clattenburg, Trailer Park Boys is a Canadian mockumentary TV series focussing on the daily lives and blunders of a group of ex-con trailer park inhabitants. Based on the 1999 Clattenburg film of the same name, the show premiered in 2001, and although it was due to end in 2007 with a series finale special, the franchise has continued to be popular over the years. The Movie (2006), Countdown to Liquor Day (2009) and Don't Legalize it (2014) are three films that have been released as part of the series. Netflix has aired four seasons of Trailer Park Boys since its initial run, and the stars of the show often tour, taking their misadventures to the stage.