It's time for some banjo pluckin', foot stompin' Americana from Trampled by Turtles! The Minnesotan six-piece brings its lively, unique sound, which incorporates elements of country, rock and bluegrass, to Red Rocks Amphitheater on Wednesday 24th July 2019, and it's bound to get the crowd going something wild! Expect nothing less than a night of music to boogie to from this wonderfully eclectic band! 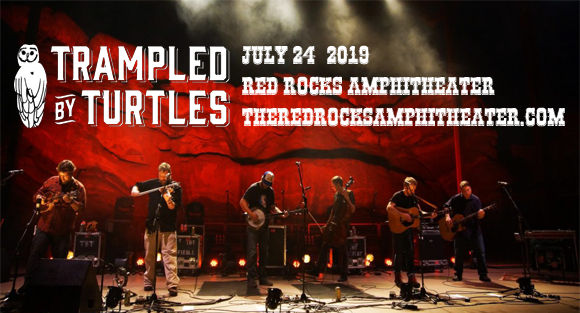 American bluegrass/folk-rock band Trampled By Turtles hails from Duluth, Minnesota and was formed in 2003. The group has released eight full albums since its inception, three of which have reached US Billboard chart number one spots, and its fifth studio album, Palomino, remained in the Top 10 on the Billboard Bluegrass Chart for 52 straight weeks. The group's  latest album, Life is Good on the Open Road, was released in 2018. The band is known for its extensive touring schedule and lively live performances, and it has performed at numerous festivals including Coachella, Bonnaroo, Stagecoach, Hardly Strictly Bluegrass and Bumbershoot, among others.