Get ready for a very special show at Colorado’s iconic amphitheater! That’s right, this year Trampled By Turtles, joined by The Oh Hellos and Dead Horses, will perform a headlining show, live on Thursday 19th July 2018! Get ready for a night of folk and bluegrass at the world’s most visually stunning venue – what are you waiting for?? Book NOW to be sure of your place!! 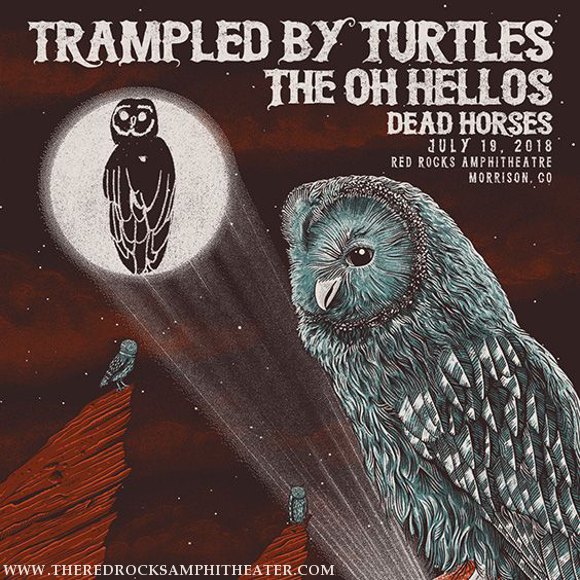 Formed in Minnesota in 2003, Trampled By Turtles have hit the top of the Billboard charts no less than three times with their bluegrass and folk-rock tinged albums. Achieving widespread popularity with their blend of traditional and contemporary elements, the band have had massive crossover appeal that has helped them become an especially popular festival act in addition to their chart success. Their new album, “Life Is Good On The Open Road” is out May 4 – just the right amount of time to be word-perfect on all the songs before the show!!

Support act The Oh Hellos are a sibling folk rock duo, comprised of Tyler and Maggie Heath, having achieved huge popularity while remaining entirely independent! They’ll be performing with their brand new 2018 album “Eurus”. Last but not least, it’s the Dead Horses, with their new EP “Cartoon Moon”!!

It’s going to be a truly unforgettable night – make sure you’re there!! Get your hands on tickets today while they last!!