Returning to the historical concert-scape of the Red Rocks is folk, roots, and reggae singer-songwriter Trevor Hall, but this time on a double-headliner tour with blues-soul singer-songwriter Citizen Cope. Be enthralled, enlightened, and entertained as Trevor Hall and Citizen Cope shared the stage at Red Rocks Amphitheater on Thursday 28th April 2022. Speaking to his fans, Trevor Hall says, “It is through your incredible LOVE and SUPPORT that all of this is possible. I feel so blessed to be a part of this community … to share in the healing balm of sound and music with all of you. I don't know where I'd be without it. To have the opportunity once again to share our music with you all in such a sacred and EPIC place like Red Rocks brings me to my kneeeeeeees.” Now get your hands on tickets to the show, and that is just right at your fingertips. Click on the 'Get Tickets' link on this site now! 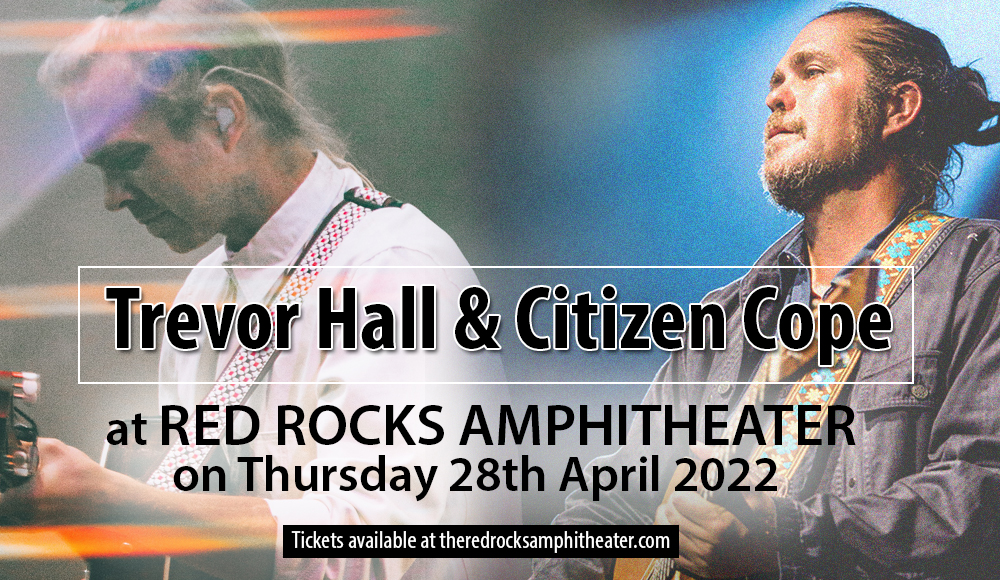 Trevor Hall & Citizen Cope are both free-spirited artist musicians who create, express and share their music from the depths of their souls. Their innate artistry at a young age did not escape the ears of record labels who signed them up during their early years, yet both deliberately chose creative and artistic freedom over contracts, to drive their music careers to the next level.

Trevor Hall's first big break as a professional artist came when his song was chosen to be part of the movie Shrek The Third soundtrack. From there, he went on the road with accomplished artists and musicians, sharing the stage with the likes of Steel Pulse, The Wailers, Jimmy Cliff, Matisyahu, Michael Franti and Colbie Callait. As he was introduced to yoga and meditation practices and spirituality, his music evolved along with it, merging the sounds of acoustic rock, reggae and Sanskrit chanting. in 2009, Trevor’s self-titled debut album debuted on Billboard’s Heatseeker chart at #7, propelled by the single “Unity,” written and performed with his longtime friend, Matisyahu. Trevor was named one of the Top 20 New Artists by Music Connection magazine and in 2010 MTV named him one of the twenty emerging artists. His most recent album "Kala" debuted at No. 2 on the iTunes singer-songwriter chart; with Popmaters calling it “…a graceful amalgam of styles by a musician who loves to embrace the music of the world.”

A writer from Rolling Stone describes Citizen Hope's music and artistry as “Rawness improbably balanced by a mixture of danger and delicacy, is what gives Citizen Cope his edge. As a singer, songwriter, and producer, he stands alone—an artist immune to corruption.” More often compared to the likes of Jack Johnson, Van Morrison, Bill Withers, or Willie Nelson, Citizen Cope's mix of blues, soul, folk, and rock takes a life of its own. His compositions and exemplary production work brought him working side-by-side contemporary music icons such as Carlos Santana, Sheryl Crow, Dido, and many more. He scored his first hit with the album "Every Waking Moment", which reached No. 69 on the US Billboard Hot 200 charts. He claimed higher chart positions with" The Rainwater" LP, which was No. 10 on the US Independent Albums chart in 2010, and 2012's "One Lovely Day", which reached No. 39 overall. Cope's most recent album release to date is "Heroin and Helicopters", his first full-length album in 15 years.

Hall and Cope at the Red Rocks is guaranteed to make it to the top list of landmark shows this year. Don't miss it!