Trombone Shorty and his band, Orleans Avenue are back, bringing jazz to the center stage on Trombone Shorty's Voodoo Threauxdown tour. Apart from signature jazz grooves led by the trombone master himself, the tour features curated artists from funk to hip-hop picked by yours truly, all hailing from New Orleans. Catch Trombone Shorty & Orleans Avenue together with special guests Tank and The Bangas and Big Freedia at Red Rocks Amphitheater on Tuesday, June 28, 2022. Trombone Shorty just released "Come Back", the lead single off of his soon-to-be-released new album "Lifted". Don't miss out on new grooves from "Lifted" live on stage, and fresh beats from New Orleans' best artists joining the stage. Book your tickets now! 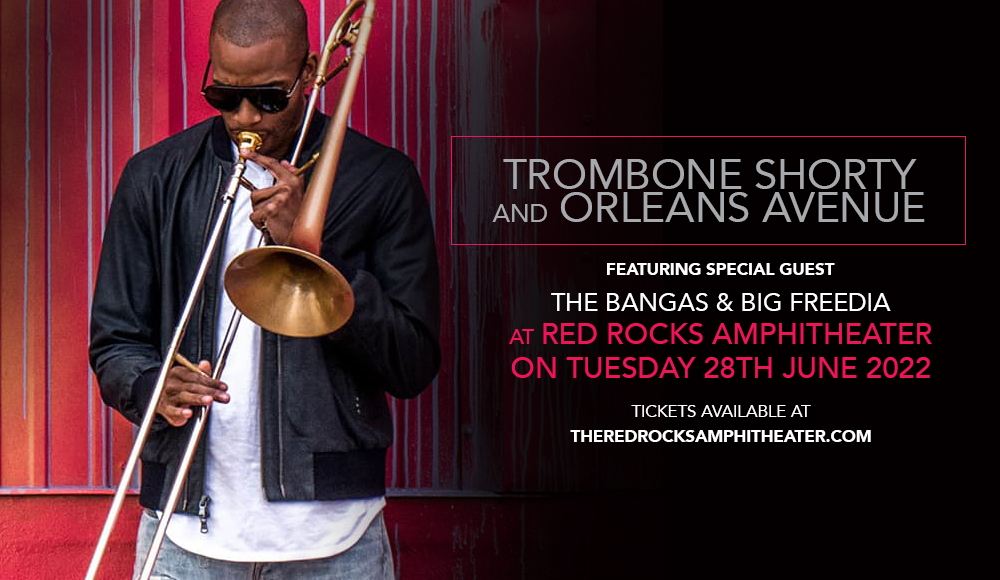 The golden boy hailing from New Orleans, Troy Andrews, or Trombone Shorty as we all know him, is set to release his comeback record, "Lifted", arriving on April 29th, after five years of keeping fans waiting. He also recently dropped the album's lead single, "Come Back".

Trombone Shorty, in a press release, shared the significance of the new record's name and artwork, paying homage to his late mother, saying “She passed recently, but she continued to inspire me right up until she transitioned, and that’s why I put a picture of her holding me up at a second line on the cover of this album. She lifted me up my whole life".

From appearing onstage with Bo Diddley at the New Orleans Jazz & Heritage Festival at four years old, Troy, or Trombone Shorty, found himself making waves in the jazz scene, keeping the New Orleans jazz heritage alive. He has released several albums and collaborations with various artists throughout his career.

As Trombone Shorty rises on a new journey, the man is definitely back stronger than ever. As the proud jazz legend from New Orleans blows everyone's ears off of his captivating trombone grooves together with his band, he's on a mission to share New Orleans's diverse musical styles with guest artists Tank and The Bangas and Big Freedia, among others on the roster for the rest of the tour.

“These are people that I grew up listening to, people I came up with, and people who have been inspired by me and my band,” says Troy.

As Troy, or Trombone Shorty rather, is pumped up to have fans lend their to his new record, and see them on the tour, Troy says “I think Lifted is the closest we’ve ever gotten to bottling up the live show and putting it on a record. This time around I told everybody to really cut loose, to perform like they were onstage at a festival.”

As live concerts make its comeback this 2022, Trombone Shorty is back to hype up the jazz groove with a comeback record and a tour featuring New Orleans' best artists across different genres. So, book those tickets now, and get on the groove, led by the one and only Trombone Shorty.