Jazz and blues lovers alike, get ready for an event tailor-made for you at our Red Rocks Amphitheater – that's right, it's Trombone Shorty & Orleans Avenue!! The New Orleans collective will play their hearts out for you on Wednesday 16th August 2017. Tickets for this show will sell lightening fast, so grab yours now – just hit the “Buy Tickets,” button above!! 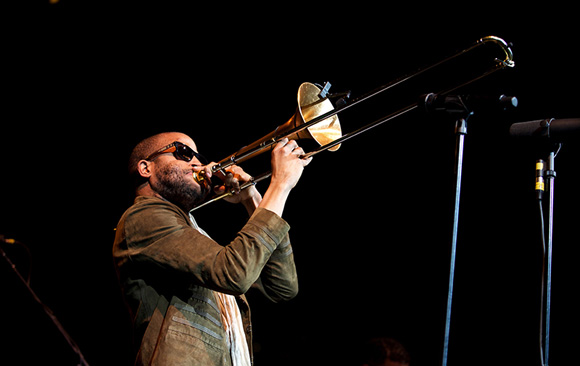 Troy Andrews, best known as Trombone Shorty, is a musician, actor, producer, philanthropist and multi-instrumentalist, best known for his skills on trumpet and, of course, trombone. The younger brother of bandleader James Andrews and the grandson of legendary songwriter Jessie Hill, Trombone Shorty has collaborated and performed alongside some of the biggest names in music and at some of the biggest locations – including several times at the White House and multiple sellout shows at Madison Square Gardens!! Gaining a reputation and distinction for his virtuosic talent and energy-packed live shows, he earned a Grammy Award nomination in 2011, and In 2016, was named to Forbes' "30 Under 30" Class of 2016 for Music alongside Selena Gomez, The Weeknd and Jon Batiste.

Having toured with acts including the Foo Fighters and Red Hot Chili Peppers with his band Orleans Avenue, Trombone Shorty's sound is hard-edged funk, with massive rock dynamics, classic brass-band beats and, of course, all the jazz improv you could possibly ask for. For a full-on, mind-blowing jazz, funk and blues experience like nothing you've ever heard before in the most incredible location on the planet, you need look no further. Get your tickets to see Trombone Shorty now – while they last!!