EDM aficionados of all stripes are all set to converge as the beat drops at the Red Rocks Amphitheater on Friday 18th October 2019. The dynamic duo of electronic music are on their way to this side of town. TroyBoi & G Jones will turn up the heat on live stages in various parts of the country and the world. Buckle-up for this wild ride into an aural soundscape painted by two electronic music meisters. Book your tickets now! 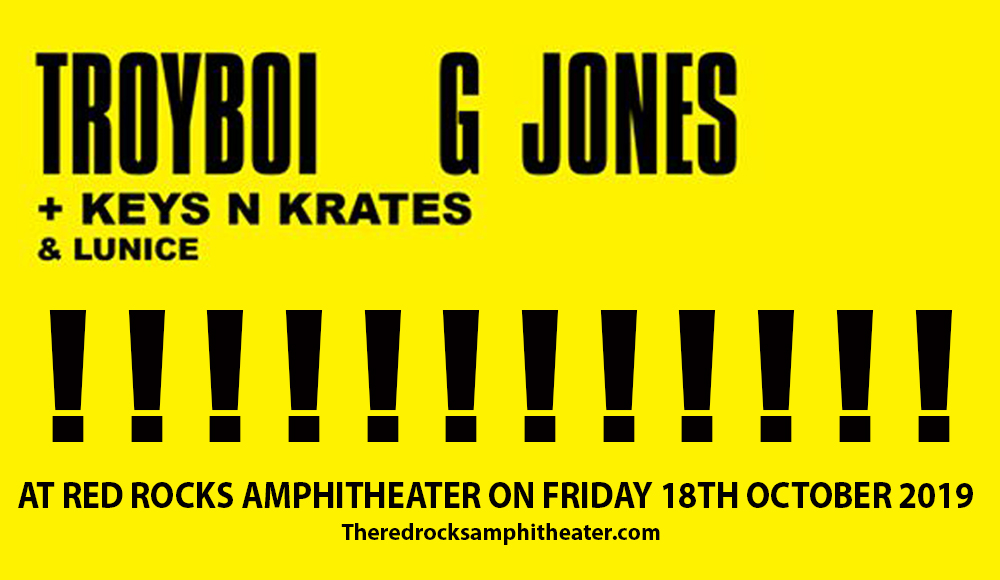 TroyBoi may be loosely classified as an EDM artist but he has chosen to brand his body of work as "My Style". Out of the shadows and dark alleys of South East London, TroyBoi emerged with talent, sound, and showmanship that poised to conquer the world. He has collaborated with the so-called titans of recording producers such as Timbaland and Flosstradamus, to name a few.

Playing back-to-back with TroyBoi is the equally irrepessible G Jones. From the underground bass music scene in Santa Cruz and the Bay Area, G Jones emerged as a master DJ and record producer in the studio and on the live stage. He is the most-sought-after collaborator of EDM biggies such as Bassnectar, Eprom and DJ Shadow, tagging him as “the most gifted Ableton beatmaker I’ve ever seen.” Music critics and the press give him glowing reviews, with Rolling Stone branding him a “studio wizard.” Billboard Magazine lauded his single with lofty descriptions– “understanding the possibility": “That's what listening to G Jones will do. It's a mental minefield of sudden drops and stutters, bass lines that open holes under your feet and send you shooting sideways to some warped mystery land.”

Don't pass up on this opportunity to trip the light fantastic with not one, but two superstar EDM masters. Grab this hot ticket now!