As a celebration of its 25th anniversary, Umphrey's McGee will be bringing fun, groove, and world-class improvisations to the iconic Red Rocks Amphitheatre this Saturday, June 17. This is going to be an extravaganza of genre-bending and explosive music that will leave any audience in awe. The band has been known to perform musical numbers that are risky, out of the box, and spirited. Like any of their concerts, this is going to be full of surprises. They have been cooking something exciting, and it is sure to knock you out. Prepare your ears for their best hits, such as "Ocean Billy," "Women Wine and Song," "Sad Clint Eastwood," and many more. Remember, they never play the same show twice, so don't miss this. Get tickets now! 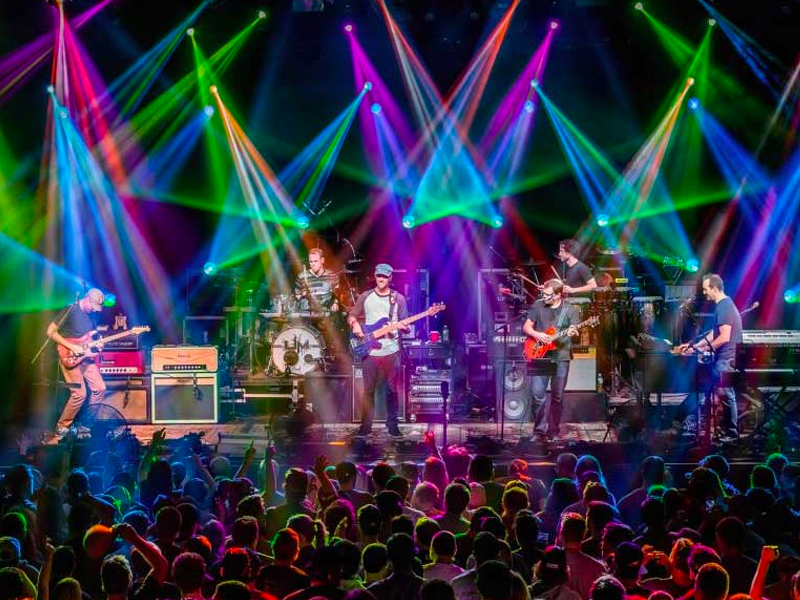 Umphrey's McGee is a jam band from South Bend, Indiana. With a sound that is a mix of progressive rock, jazz, funk, and even metal, their music stands out as something truly unique. From their early days playing in bars around the Midwest to headlining festivals, Umphrey's McGee has made a name for themselves as an improvisational jam band that never plays the same show twice.

Umphrey's McGee has been together since 1997, established with members that include Brendan Bayliss (guitar/vocals), Ryan Stasik (bass), Joel Cummins (keyboard), and Mike Mirro (drums). The band has released 14 studio albums, 18 live albums, and a handful of EPs, singles, and compilations. While their lineup has changed over the years, the core of the band has stayed the same, with guitarist and vocalist Brendan Bayliss, keyboardist Joel Cummins, bassist Ryan Stasik, and drummer Kris Myers. This core group of musicians has helped the band craft a unique sound and style that is both technically impressive and musically rewarding. The band's signature sound is a blend of rock, jazz, and funk, with elements of metal and prog rock thrown into the mix. While they are primarily an improvisational jam band, their songs also feature tight, well-written structures that give the band plenty of room to explore and develop their sound, such as in their albums "Greatest Hits Vol. III," "The Bottom Half," and their most recent release, "Asking For A Friend." This is evident in their live shows, which feature extended jams that often explore different musical styles, as well as their studio albums, which feature more concise, structured songs that showcase the band's musical talents.

On their 25th anniversary, the Red Rocks Amphitheatre will host their celebratory concert for two days ending on June 17. The lauded band will be performing their best hits that have become highlights of their career. Reserve your tickets now!