This June, Red Rocks Amphitheater will certainly be swarmed with dedicated concertgoers as one of the greatest jam bands of all time, Umphrey's Mcgee, returns to the Red Rocks Amphitheater for their "Peak Summer Tour." Join our favorite six-piece jam band this June 17 & 18 at Colorado's famous venue for an evening of timeless hit songs, explosive percussions, heavy guitars, and impressively choreographed visuals that will satisfy the jam-band lover in you! If you think last year's Red Rocks concert was epic, this year will be larger-than-life! So don't forget to get a hold of this limited 2-day pass ticket for their show. We know you can't get enough of UM's live performances, so click on the "Get Tickets" button to get yours today! 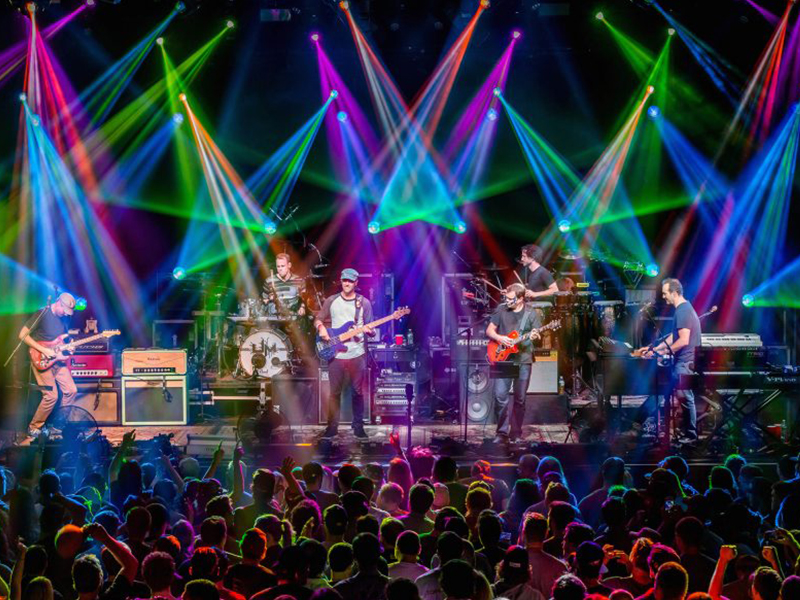 Throughout its career, the experimental jam band Umphrey's McGee has established itself as one of the most sought-after live jam bands in the industry. Along with Phish and Dave Matthews Band, the Indiana-native band composed of Brendan Bayliss, Joel Cummins, Ryan Stasik, Andy Farag, Jake Cinninger, and Kris Myers has long been experimenting with many musical styles, including rock and metal funk, jazz, blues, reggae, electronic, and folk.

Like most jam bands, UM is known for their unpredictable live concerts. There's always a sense of mystery to what the band's setlist would be in each show. This uniqueness adds to the excitement of what fans would expect. Not to mention the infamous walk-on music that has become the band's trademark.

In addition, they are also famous for their innovative schemes and well-thought live concert production. They can enthrall an audience through playful and colorful lighting perfectly synched with their instrumentations. Even if you are unfamiliar with the song the band plays, you'll undoubtedly be in awe of such showmanship. That is why the band's yearly summer stint at the famous Red Rocks amphitheater is always a hit among concertgoers.

Their "Peak Summer" show marks their return to the beloved Red Rocks Amphitheatre sandwiched between evenings at the Dillon Amphitheater and the Gerald Ford Amphitheater. Yes, you've heard it right! Umphrey's McGee has 4 nights straight of epic shows in Colorado. The weekend kicks off Thursday, June 16th in Dillon, followed by a double-header at Red Rocks on Friday the 17th with special guests lespecial and Saturday, the 18th with Andy Frasco and the U.N. Peak Summer culminates in gorgeous Vail on Sunday, June 19th.

This is your chance to get a hold of a two-day pass for the Red Rocks back-to-back shows. Click on the "Get Tickets" button to get yours today! Hurry because only a few tickets are left!