Its the third and final night of Umphrey's McGee's incredible summer weekend of shows! Their concerts are well known for being an exciting, highly anticipated experience as they transform the stage into a jaw dropping display to suit their impeccable music skills! Their Sunday date will feature a performance from Goose & Godboner – so what are you waiting for?! Join them all at Red Rocks Amphitheater on Sunday 21st June 2020! Celebrate the summer in style! 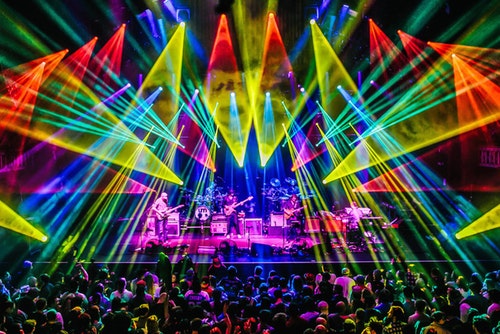 RED ROCKS fans it's time to once again put your hands together for the flawless performers Umphrey's McGee as they head on down back to the stage for another groundbreaking weekend of the very best musicianship! As they hit the stage, everybody knows that Umphrey's McGee sure know how to get the crowd moving and captivated with their out of this world, extraordinary light displays and of course, the most important thing – the music.

Filled with talented members, Umphrey's McGee are; Jake Cinninger, Brendan Bayliss, Ryan Stasik, Joel Cummins, Kris Myers, Andy Farag, Mike Mirro and together they have been creating their sound ever since their formation back in the 1990's. Their career has become a long standing and exciting one, with plenty of accomplishments and highlights along the way. And with their extensive tours, they always give their fan following plenty of opportunity to experience their music live on stage. As one of the most experimenting bands around, Umphrey's McGee cross over the genre's and break all the boundaries, with elements of rock, metal, funk, jazz, blues, reggae, electronic, bluegrass, and folk throughout.

Join them as they make more unforgettable moments at their 2020 Red Rocks summer weekend of shows! This is your last chance to catch them in June in Colorado as Sunday is the last night of performance – don't miss out on this epic showcase – grab your tickets to be there, right in the heart of the crowd! Chances are it will be full of adoring fans just like you, what a place to be!