MASSIVE news!! After making their huge 2016 comeback after a 4-year hiatus with a pair of instantly sold-out 3-night runs in Colorado and New York followed by a number of major festival appearances, WEEN are returning to the Red Rocks Amphitheater for the first time in 10 years!! Get your tickets NOW and head down on Wednesday 12th July for one of the best shows of your life!! 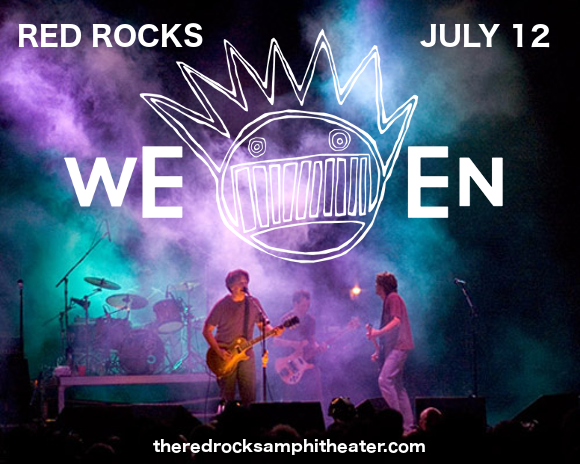 Formed in New Hope, Pennsylvania, in 1984 by childhood friends Aaron Freeman and Mickey Melchiondo. Inspired by The Ramones, they named themselves Ween and took on the stage pseudonyms Gene Ween and Dean Ween. The two performed as a duo backed by a digital audio tape for their first decade, before expanding to a 5-piece act. Known for their vastly diverse range of styles, influenced by R&B, heavy metal, punk rock, funk, soul, country, gospel, and prog, Ween are much, much more than an alternative rock band!! Over the years their eclectic, genre-defying sound earned them a large and devoted cult following.

Live, the band show their full versatility, going from high-energy, danceable rockabilly numbers to intricate and beautiful songs that display their musicianship at its finest. Expect full-on heavy metal songs to be instantly replaced by acoustic ballads not dissimilar to Simon and Garfunkel, absurd voice distortion and manipulation from manic vocalist Gene Wene, and a sound and light show that will dazzle you! A show as mesmerising and hypnotic as it is as wacky and wonderful, Ween promise a truly unmissable show at the Red Rocks Amphitheater!