Why Don't We [CANCELLED] Tickets

Fans around the globe have been dying to say those 'eight letters to express their love for the cheeky boyband who stole the hearts of listeners across the world. Why Don't We is back for a good time as they prepare to meet their fans at The Good Times Only Tour happening at Red Rocks Amphitheater on Sunday, 19th of June 2022. Now's your chance to scream those '8 letters out loud as they sing their biggest anthems, fan favorites, and new tracks off of their newest record "The Good Times and the Bad Ones". The voices behind hit singles "Trust Fund Baby", "What Am I", and "8 Letters" promises to bring you only a good time aboard this tour. So, don't miss out and grab those tickets now! 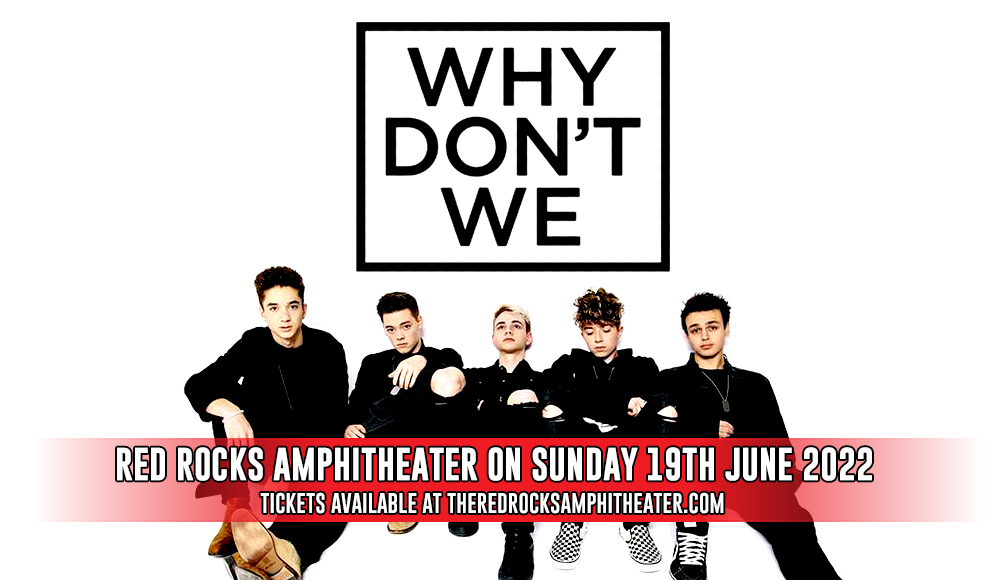 Why Don't We captured the hearts of fans worldwide with only 'eight letters they couldn't seem to say, but fans came running screaming whatever those eight letters were as members Jack Avery, Corbyn Besson, Zach Herron, Jonah Marais, and Daniel Seavey all won their hearts.

After forming the band in 2016, the boys released their debut single "Taking You" from their first EP "Only the Beginning". It was indeed the beginning of dominating the world stage as they went on tours and released a couple of more EPs before their global breakthrough with their debut album "8 Letters" in 2018. The album featured hit singles "Trust Fund Baby" and "8 Letters" which propelled them to reach a wider global audience.

Why Don't We kicked off 2019 with their first single for the year "Big Plans". Big plans were definitely ahead as the band released a slew of new singles throughout the year including "I Don't Belong in This Club" with Macklemore, "Unbelievable" and "What Am I". After wrapping up 2019 with its final single "Chills", the band made a big comeback in 2020 with new singles that gave fans a taste of their new record "The Good Times and the Bad Ones".

"Fallin' (Adrenaline)", their first single off of "The Good Times and the Bad Ones", marked the band's new era for their new album, with the single being their first entry to the Hot 100. They were featured in a YouTube documentary called "30 Days With" which gave fans a glimpse of the development and exclusive behind-the-scenes content for their upcoming record.

By January of 2021, Why Don't We finally dropped "The Good Times and the Bad Ones" which debuted at #3 on the Billboard 200 albums chart, marking their highest to date. The album is mostly a self-produced shared effort by the boys, though featuring some productions by Travis Barker, Timbaland, and Skrillex.

As they prepare to embark on this big tour to finally meet their fans and perform their biggest hits and fresh new songs live on stage, the boys brought another surprise for 2022. Why Don't We just recently shared their newest single "Don't Wake Me Up" with Jonas Blue, a love-longing induced track where they sing 'no matter what the odds, I’m gonna try.

So, don't miss out on the chance to finally scream those '8 letters out loud as Why Don't We hits the stage at Red Rocks on June 19, 2022. The boys promise only a good time as they perform their best anthems and new songs live on their much-awaited tour. So, book your tickets now!