The Colorado favorite – Widespread Panic are coming to blow you away for 3 LIVE nights of music!

The Red Rocks Amphitheater presents Widespread Panic in all of their glory, these guys are on the top list for who to see this Summer season! From the 23 – 25th you can catch them as they take to the stage with an exciting bunch of material, including brand new releases… all of this will kick off on Friday 23rd June 2017! Whatever you do, don't wait around – book your tickets for this unmissable event!! 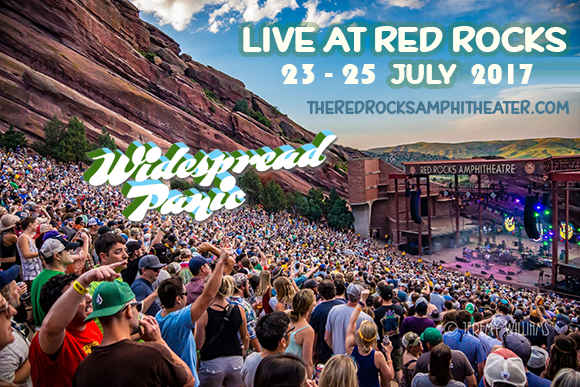 Blues Rockers, Widespread Panic have caused quite the stir all around North America with their jam band style, but this group aren't your average sound, they know how to really rock a stage and get the crowd moving. So it's no wonder the constantly pick up fans where-ever they go to add to their already dedicated base.

Widespread Panic include; guitarist/singer John Bell, bassist Dave Schools, drummer Duane Trucks, percussionist Domingo "Sunny" Ortiz, keyboardist John "JoJo" Hermann, and guitarist Jimmy Herring. Michael Houser and George McConnell who have also been guitarists for the group and Todd Nance retired in 2016 as their original drummer.
With these minor changes, they have developed and risen in their status and have often been referred to as "Road Warriors"… if you love great music, then you are sure to love them!