What a summer for alt-rock fans! In an unexpected and, frankly, awesome move, alt-rock giants Wilco & Sleater-Kinney have teamed up for the co-headliner of our dreams! The It's Time Tour comes to Red Rocks Amphitheater on Tuesday 10th August 2021 and sees both bands performing tracks from throughout their mighty careers, but specifically from their most recent albums, having both launched new releases last year (Wilco's Ode to Joy and Sleater-Kinney's The Center Won't Hold)! Whether the two bands will team up for a collab or not remains to be seen, but we're crossing everything that it'll happen! 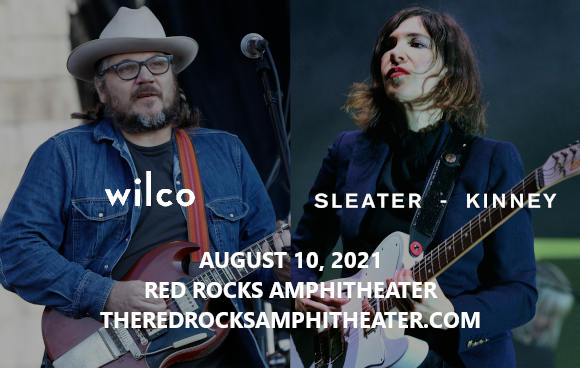 After the Chicago-based alternative country band Uncle Tupelo folded in 1994 when its singer left, the band's came together to form the alt-rock band Wilco. Making its debut the following year with A.M., the band soon became a fixture of the alt-rock scene, and soon found national fame. Throughout its 25 year career, the band has seen a number of line-up changes, with singer Jeff Tweedy and bassist John Stirratt remaining as the group's most consistent members. The band has released 11 albums over the years, finding its peak with 2004's A Ghost Is Born, which won them two Grammy Awards. The band's most recent album, Ode to Joy, was released in October 2019 and number one on the Billboard Folk Albums and Independent Albums charts, as well as number two on the Top Rock Albums Chart and number 21 on the Billboard 200.