They're like the yin and the yang. Formidable music forces, complete opposites by nature, yet strikingly complementary, interconnected, and harmonious. Wu-Tang Clan's dark and aggressive beats meet the gentle power of The Colorado Symphony. Their music is going head-to-head yet masterfully intertwined for a stellar performance at the Red Rocks Amphitheater on Friday 13th August 2021. Mind-blowing could be an understatement. You've got to be there to experience the magnitude of it all! The 'Get Tickets' sign above has been flash on this site. With a few quick and easy clicks, you'll be on your way to being part of this ground-smashing music event. Book your tickets now! 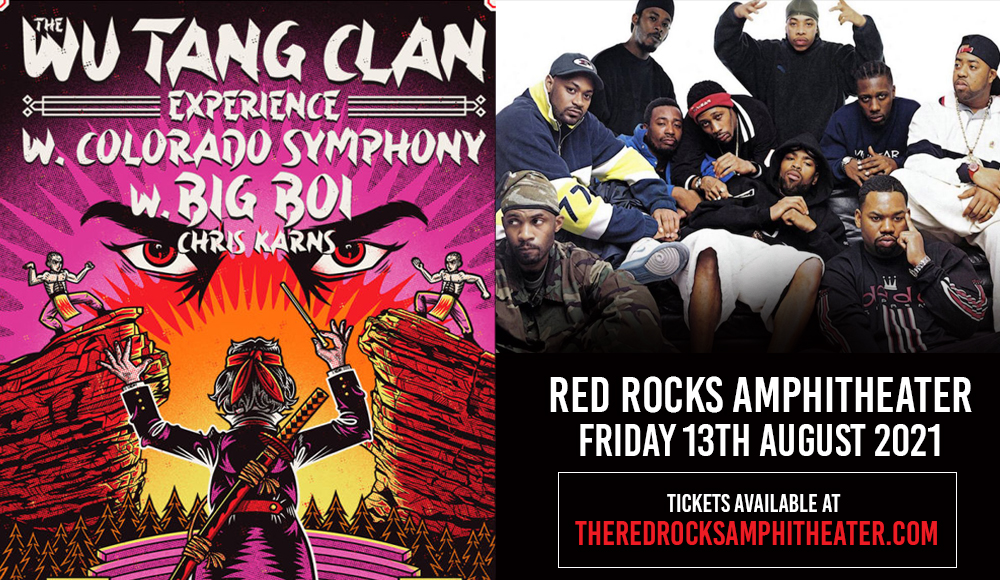 Wu-Tang Clan is not any other rap, hip-hop group to mess around with. They are in the major league, highly influential in the hardcore hip-hop scene. Formed on Staten Island, New York City in 1992, they are figuratively and literally a big group with nine members. Diverse in personalities and creatively unique in talent, each persona is a facet to their overall dark, bold, twisted, and innovative sound, making them one of the most influential and dominant forces in hardcore hip hop groups of all time.

The Wu-Tang Clan has sold over 40 million albums, (and still counting) — spawning seven gold and platinum studio albums. Their 1992 debut album, "Enter the Wu-Tang (36 Chambers)" has made an indelible mark in the hip-hop scene, consistently rated as one of the greatest hip hop albums of all time. Aside from Wu-Tang Clan's commercial success, the press and music critics have sung nothing but praises. " They were ranked by "About" as the 'No. 1 greatest hip hop group of all time'. Rolling Stone hails Wu-Tang Clan as "the best rap group ever". In 2004, NME lauded them as one of the most influential groups of the last ten years.

This time, The Wu-Tang Clan has added another feather to its cap with this rather extraordinary fusion of sounds as they perform with The Colorado Symphony. Don't miss a beat. Get your tickets now!