This year's Halloween on the Rocks is an absolute must for any hip hop fan, as Wu-Tang Clan, Jedi Mind Tricks and Immortal Technique take over the stage at Red Rocks Amphitheater on Thursday 31st October 2019! The legendary rap group will headline, with one of the most killer support line-ups Red Rocks has seen, all happening at one of the world's most iconic venues! You won't want to miss this show… 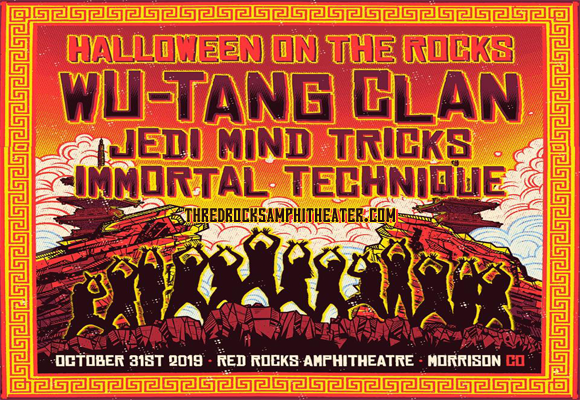 One of the most influential and best-known hip hop groups of all time (considered by many as the greatest rap group of all time), Wu-Tang Clan formed in 1991 in Staten Island, New York. The group made its debut in 1993 with the seminal album Enter the Wu-Tang (36 Chambers) (1993), which is considered by many to be one of the greatest albums in hip-hop history. Originally comprised of East Coast rappers RZA, GZA, Ol' Dirty Bastard, Method Man, Raekwon, Ghostface Killah, Inspectah Deck, U-God and Masta Killa, the group has launched the careers of several affiliated rappers and groups, collectively known as the Wu-Tang Killa Bees. Since its inception, Wu-Tang Clan has released four gold and platinum studio albums. The group's most recent album is 2017's The Saga Continues.