One of the hottest DJs in EDM history, Zedd, is back to hit the stage at the iconic Red Rocks Amphitheater on Wednesday, 31st of August 2022. The "Clarity" hitmaker is set to get the party started and turn up the night as the crowd goes wild to his biggest hits over the last decade. His chart-topping hits such as "Stay the Night" with Hayley Williams, "Stay" with Alessia Cara, "The Middle" with Maren Morris and Grey, and "Clarity" feat. Foxes have all defined the EDM scene over the last decade. So, get ready to jump and rave to a lit night led by the one and only Zedd. Book your tickets now! 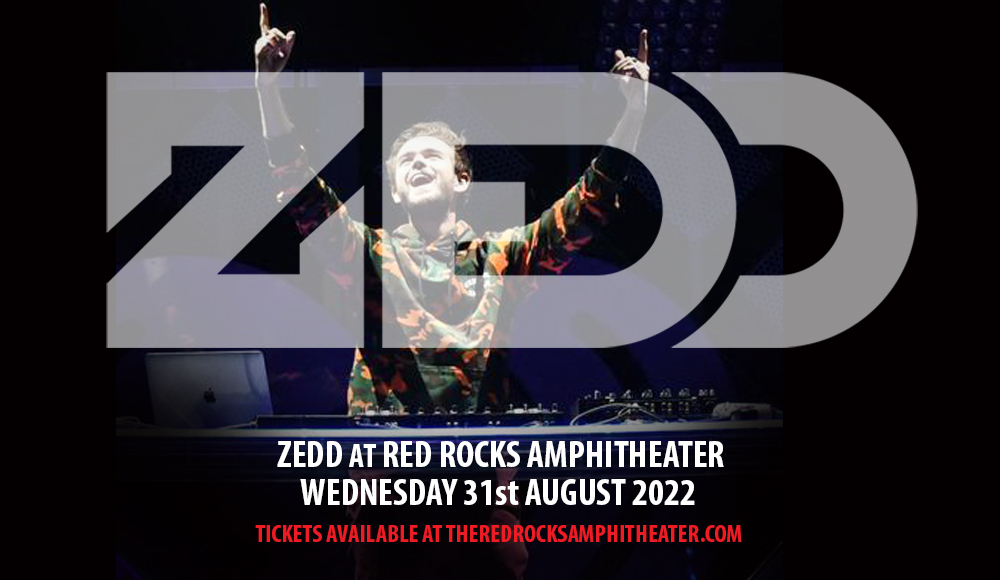 Growing up in Germany, Zedd is a classically trained musician. He began to play the piano at four, and the drums at twelve. His interest in electronic music sparked after listening to Cross by the French DJ duo Justice. In 2010, he won two remix contests on Beatport, and from then on, he started making waves in the electronic scene.

He started off remixing tracks from well-known artists such as Lady Gaga, Justin Bieber, and the Black Eyed Peas. Zedd signed with Interscope in 2012 and released his major-label debut single "Spectrum" featuring Matthew Koma.

Having released his debut album "Clarity" in October of 2012, Zedd found his global breakthrough with his album's third single "Clarity" featuring Foxes in 2013. "Clarity" hit the top 10 of the US Hot 100, becoming the #1 most played song on American radio. The single is now certified 5x Platinum by the RIAA.

From then on, Zedd changed the game in EDM. His next global hit singles and collaborations became decade-defining tracks in the EDM landscape. His other highly acclaimed work and collaborations include "Stay the Night" feat. Hayley Williams, "I Want You to Know" feat. Selena Gomez, "The Middle" with Maren Morris and Grey, and "365" with Katy Perry. His mega-hit collaborations as a featured artist include "Break Free" with Ariana Grande and "Starving" with Hailee Steinfeld and Grey.

As 2022 marks the rising return of live shows across the world, Zedd is back to bring the decade's best EDM hits to the stage, bringing heart-racing moments for the crowd. "What's most important for me is for the crowd to go home and think that was an incredible experience. And to think that they can't get that same experience from anybody else." Zedd told Forbes in 2017.

Don't miss out on Zedd's big return to the stage at Red Rocks this August 31st. Get ready to raise those hands, jump, and rave to your favorite heart-racing electronic hits by the one and only Zedd. Grab those tickets now!