May the funk be with you! Lettuce comes to Red Rocks Amphitheater on Saturday 15th June 2019 for their fourth annual Rage Rocks show, and this year they'll be playing two full sets, including a Jerry Garcia Band cover set! Joining the groovemeisters will be TAUK and The Soul Rebels!

“The scenery and feeling at this divine location in Morrison, Colorado makes Red Rocks Amphitheatre a multi-sensory experience by itself. Add in two tablespoons of Jimi Hendrix’s historic performances here, a half cup of The Grateful Dead and Jerry Garcia’s legendary shows at the venue, and a heaping quart of the Count Basie big band’s gigantic vibe and lingering presence that is emanating from the area and you have yourself one immense vortex of goodness,” said bassist Erick “Jesus” Coomes. “It is hands down one of our very favorite venues in the country and is incomparable to any other place. Long live Colorado and it’s band of merry pranksters.” 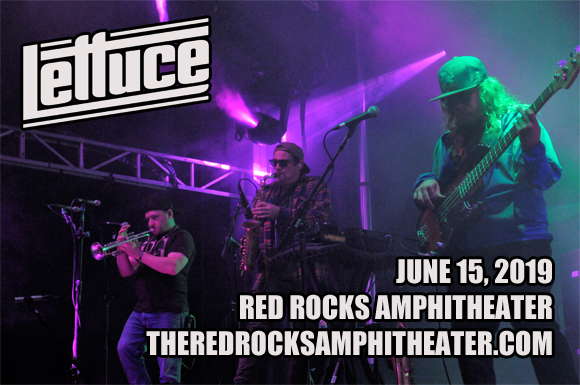 Consisting of Adam "Shmeeans" Smirnoff (guitar), Nigel Hall (keyboards, Hammond B-3 organ, piano, vocals), Adam Deitch (drums/percussion), Erick "Jesus" Coomes (bass), Ryan Zoidis (saxophone) and trumpeter Eric "Benny" Bloom, Lettuce are a funk band from Boston, Massachusetts. The band formed after several of the members attended Berklee College of Music together as teens in 1992. Two years later, they reunited at Berkeley as undergraduates and began to perform the coffee shops and jazz clubs in the local area. The group's debut album, Outta Here, was released in 2002, followed by a live album the next year. To date, the group has released five studio albums – their most recent being 2017's Witches Stew. In addition to performing as part of Lettuce, several of the group's members perform with other acts and artists, including the Rustic Overtones, Britney Spears, The Game, John Scofield, Wyclef Jean, Lady Gaga, Robert Randolph & the Family Band and the Dave Matthews Band.