It's the time to feel alive as your favorite pop-punk and rock band All Time Low is hitting the stage at Red Rocks for 'A Night To Feel Alive With All Time Low' with special guests Mayday Parade and Games We Play. The show will take place on Tuesday, 23rd of May 2023 for a night of out-of-this-world anthems live on stage. From cover songs as a high school band, All Time Low soon dominated the global stage for their hard-hitting hits such as "Dear Maria, Count Me In" and "Weightless". With a new album coming out real soon, you can expect their biggest hits and new music at A Night To Feel Alive With All Time Low at the Red Rocks. Book your tickets now! 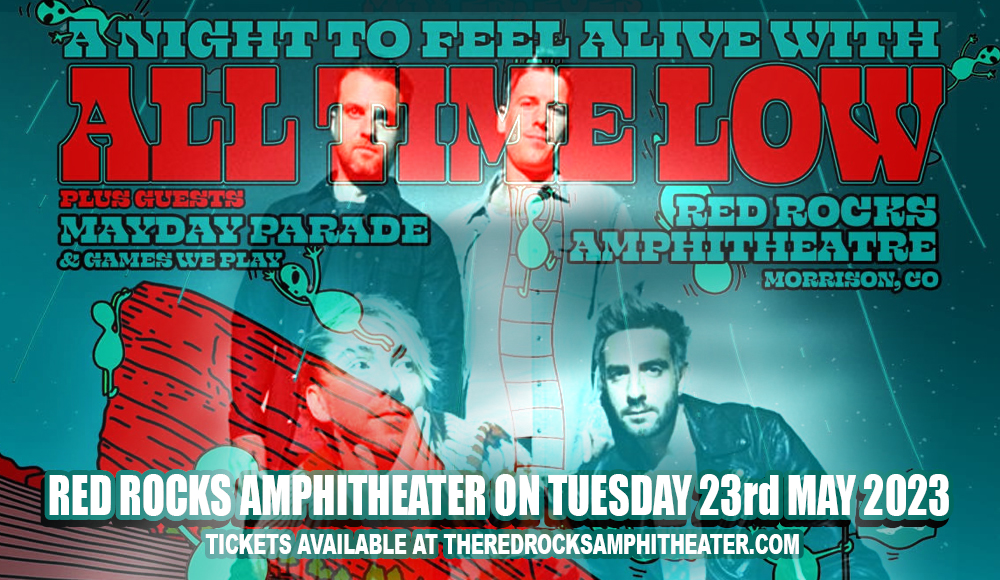 The Baltimore-rooted American rock band dominated the global stage for their incorporation of pop vibes infused with hard-hitting punk attacks. Formed in 2003, the high school cover band found themselves gaining massive attention, thereby taking music seriously soon after they graduated. Record deals here and there, the band found their big break with their sophomore album "So Wrong, It's Right". It's definitely right as the record bagged an RIAA Gold certification with its hit single "Dear Maria, Count Me In". In December 2008, the band was hailed as "Band of the Year" by Alternative Press.

In 2009, their third album's lead single "Weightless" became an instant hit as radios around the globe played the track. The single received a Gold certification from the RIAA. "Nothing Personal" was released in its entirety in July of 2009, debuting at #4 on the Billboard 200, their highest charting album to date.

With a slew of hits and rock-worthy albums that followed through, All Time Low became a staple favorite in the emo-pop and pop-punk crowd. Their succeeding hits and crowd favorites include "Damned If I Do Ya (Damned If I Don't)", "I Feel Like Dancin'", "Somewhere in Neverland", "A Love Like War" featuring Vic Fuentes, "Dirty Laundry", and "Monsters" featuring Blackbear.

All Time Low's massive Red Rocks show with Mayday Parade follows the big release of their ninth studio album "Tell Me I'm Alive" on March 17th. It definitely is 'A Night To Feel Alive with All Time Low as they bring their biggest hits and new material to the live stage.

As a taste of what to expect in the band's upcoming album, All Time Low recently shared the music video for "Tell Me I'm Alive", a hard-hitting monologue delivered as a pop-punk masterpiece. The band also previously released "Sleepwalking", the first single off of the forthcoming album.

In an Instagram post, All Time Low frontman Alex Gaskarth shared, "We wrote TMIA immediately after writing Sleepwalking… It was one of those ‘OK, the pressure’s off’ moments towards the end of the creative process. We felt like we had our first single and came into the session like the last day of school; no stress, no need to deliver anything specific,"

"Real glad to have this one out in the world. Hope it makes you wanna run through a wall." he added in a comment.

As the band shares a glimpse of what to expect in the album in its entirety, fans grow even more excited to get their hands on the new record. As the album comes out on March 17, big surprises can be expected leading up to its release. So, don't miss out on this chance to catch All Time Low joined by Mayday Parade and Games We Play at 'A Night To Feel Alive With All Time Low' at the Red Rocks by booking your tickets now!