Brandi Carlile & The Colorado Symphony come to wow the crowd at Red Rocks Amphitheater on Saturday 11th September 2021! That's right, the sensational female singer/songwriter, Brandi Carlile is back on the road for 2021 and will be making a showcase at Red Rocks this coming fall, with a concert like no other! Brandi Carlile will be performing her much-loved songs with the added beautiful arrangements from The Colorado Symphony – don't miss out on this unique experience! 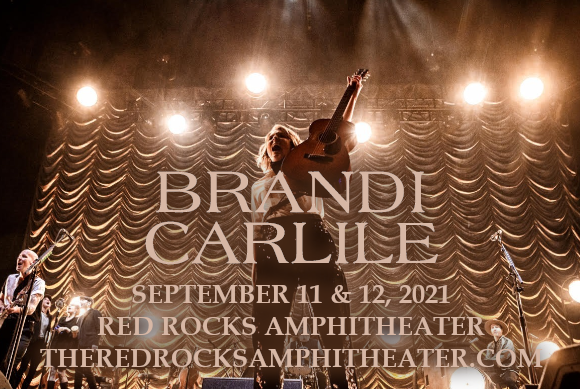 Brandi Carlile's amazing success kick started back in the mid 2000's as she brought to light her debut self-titled album and won over the hearts of many. Next came her single in 2007 "The Story" which showcased her music in all its glory and helped to push her album release under the same name as it exceeded all expectation and grabbed a gold certification along with selling to this day over five hundred thousand copies worldwide!

In a relatively short amount of time compared to some artists, Brandi Carlile has gained her impressive reputation since she first debuted onto the scene, in the last thirteen years she has produced an unbelievable six studio albums to date, all of which have grabbed the spotlight in one way or another, but most famously for The Firewatcher's Daughter which was released in 2015 and gained her a Grammy nomination and her most recent release, By the Way, I Forgive You which shot right to the top and was nominated for not one, not two, not even three, but an overwhelmingly impressive six Grammy Awards!

As Brandi Carlile has worked on developing her music, perfecting it to her unique soundscape that we all know and love her for today, she's crossed between genre's… "I've gone through all sorts of vocal phases, from pop to blues to R&B, but no matter what I do, I just can't get the country and western out of my voice."

Any task that Brandi Carlile has set out to do, she's always accomplished it, with her hard driven passion she has transformed her career and which ever the genre – we love her! Get ready to catch her sensational songs live in concert as she brings them to the Red Rocks stage in this unique setting with The Colorado Symphony at her side!