If you're a Death Cab for Cutie fan, read this: "It feels so good to write these words: DEATH CAB FOR CUTIE SEPTEMBER 2021 TOUR… We've missed your faces so much. LET'S GO." Simple, straightforward yet so inviting. Death Cab for Cutie is raring and ready to take the stage at the Red Rocks Amphitheater on Monday 13th September 2021. Your fave artist saying they missed your face is as devoted as you are in delivering an awesome show guaranteed to bring you up on your feet! Are you ever gonna miss that? Dare not. Death Cab for Cutie tickets to the Red Rocks show is on sale now. Book your tickets now! 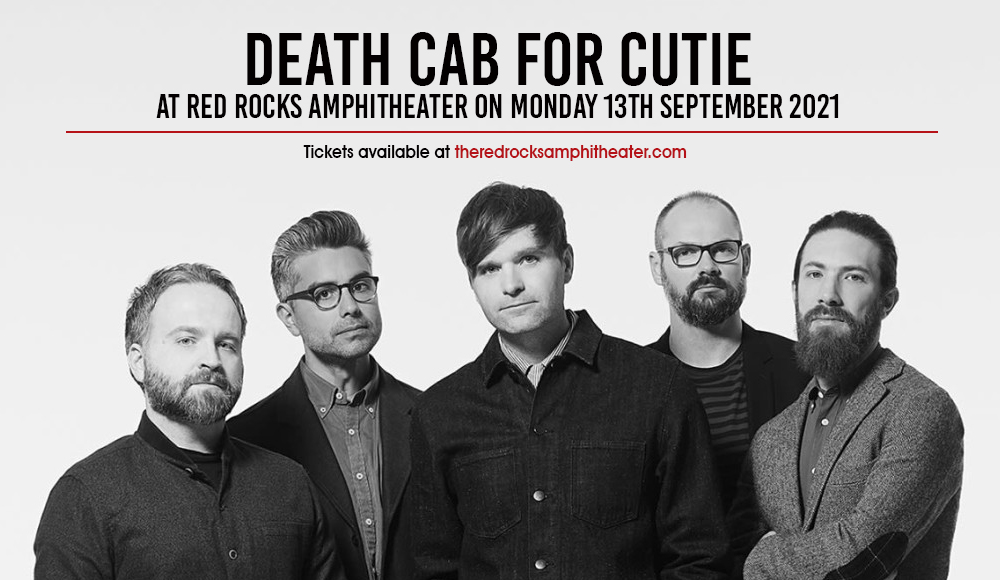 What started out as a brain-child solo project of founding member-guitarist, vocalist Ben Gibbard, became a collective unit that defined the indie-emo-alt-rock scene. Since the release of their 1998 debut album "Something About Airplanes", Death Cab For Cutie has blazed trails with a distinct and eclectic sound with their unconventional instrumentation, vocal stylings, and emotive lyrics.

Despite blurring the lines within their genre, Death Cab for Cutie has successfully managed to crossover the so-called mainstream audience. In 2003, the album "Transatlanticism" was critically and commercially well-received. Their 2005 album "Plans" debuted at number four on the Billboard charts and was certified platinum. The release of their next album, "Narrow Stairs", in 2008 kept their grip firmly on the charts as the album reached No. 1 and spawned a succession of hit singles, including "I Will Possess Your Heart."

DCFC was on a winning streak as they garnered eight nominations from the Grammy Awards, including the 2006 Best Alternative Music Album, the 2009 Best Rock Song, and the 2016 Best Rock Album. The music video for "I Will Possess your Heart" also won a 2008 MTV Video Music Award for Best Editing.

Death Cab for Cutie may not have the hysterical kind of fans, but they react by quickly getting their hands on tickets. No dramas. Just click on that 'Get Tickets' sign on this site. Book your tickets now!