Trap fans get ready for action!! Marking a special date on the Colorado calendar, with special guests What So Not, Gryffin ,and Branchez, FLOSSTRADAMUS, are coming to the Red Rocks Amphitheater on Thursday 20th April for the second year in a row!! 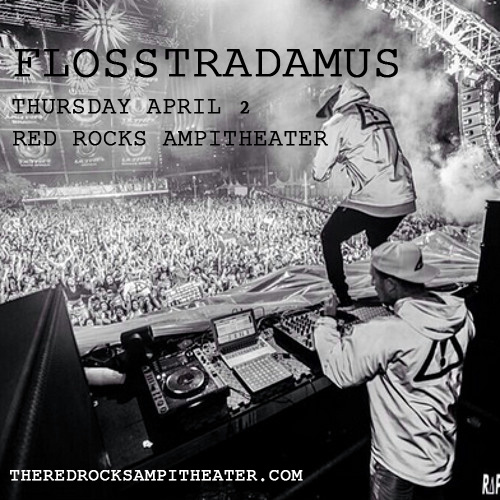 Flosstradamus is the stage name of musician and DJ Curt Cameruci. Formerly a duo with Josh Young, the pair split to form solo careers, with Cameruci keeping Flosstradamus as a stage name. As a duo, they have worked alongside many artists including Diplo, Kid Sister, Three 6 Magia's Juicy J, A-Trak, and The Cool Kids, and have appeared on Late Night with Jimmy Fallon and Yo Gabba Gabba! (Nick Jr.).

What So Not, also formerly a duo (in this case with record producer Flume), is the bass/trap project of of Emoh Instead, Australian-born musician and producer. Known for hits such as “Jaguar,” “High You Are” and “Gemini”, he has toured worldwide, featuring at massive festivals including Coachella, Pukkelpop, and Lollapalooza.

A classically trained pianist and early starter with the guitar, Dan Griffith moved from playing in bands to studying electrical engineering, mixing songs for friends to play at parties. Later, he took the stage name Gryffin as a DJ and producer, earning acclaim for remixes of well-known songs such as “Animals” by Maroon 5 and “Desire” by Years and Years.

Having remixed the famous version of What So Not's song”High You Are,” Branchez will be joining them on the line-up at our iconic venue. A self-described “*RODUCER TRYNA WRITE HITS” Branchez may be a man of few words, but he makes up for that with musical talent in abundance.

Get ready to dance like you've never danced before – grab your tickets NOW!!