Rock fans get ready as the classic bands; Foreigner, Kansas & Europe will all be heading down to Red Rocks Amphitheater on Wednesday 21st July 2021! That's right Foreigner are back on tour for 2021 and will be bringing all of their best loved hit songs to the stage this summer! As one of the biggest tours of the entire year, you'd be crazy to miss out on this chance to see Foreigner in concert! Tickets are now available, don't hold back – book yours while you still can! 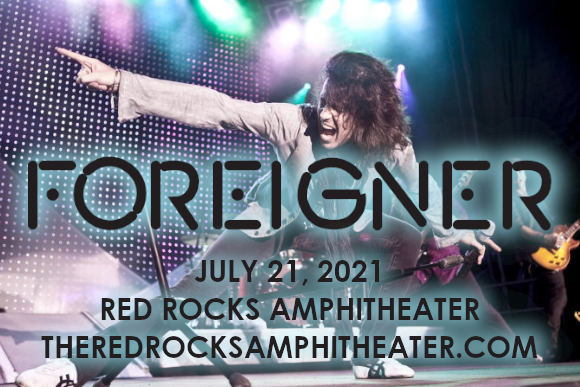 Foreigner have really conquered it all with their worldwide fame as one of the greatest bands of all time and their epic influence on music throughout the eras from their starting ground in the 1970's right up until today. Known for their flawless songwriting, Foreigner have given us hit songs that have lived through the times and now they are returning to the stage on a groundbreaking world tour for 2021!

It's no wonder that fans all over the globe are rushing for their chance to be a part of their live dates as this opportunity doesn't come around very often. Foreigner's current members include Mick Jones, Thom Gimbel, Jeff Pilson, Kelly Hansen, Michael Bluestein, Chris Frazier and Bruce Watson. All of their talented members give a classic rock edge and shape their classic sound for every performance.

With impressive sales from their albums and single releases, Foreigner have become the best band in music, with their unforgettable songs including "I Want to Know What Love Is", which topped the charts in the UK and the US, to their ever popular "Waiting for a Girl Like You", which remained at number two in the US charts for a whopping ten weeks in a row!

Foreigner have truly made their mark on music history and still remain to be a popular band to see live as their impeccable energy shines through, with an unbeatable track record of impressive sales of over eighty million records sold around the globe – it's pretty clear to see why! Their rockstar status makes their live performances a memorable experience for any one of their dedicated fans.

2021 marks a special year for Foreigner as they celebrate their success as a whole, throughout the decades, one thing remains to be true and that's their music! Come and join the celebration this coming summer as Foreigner rock the stage once more! This epic chance might not come around again, so whatever you do – don't wait too long to secure those tickets and head on down for the main event!