A legendary venue for a legendary band… Beloved southern rock jam band Gov't Mule comes to Red Rocks Amphitheater on Sunday 18th August 2019 for a night of autoschediastic musical wizardry! With no two sets alike, the world-renowned group of virtuoso performers (and their often famous musical guests) are notable for their captivating and entertaining live sets that push the boundaries of improv-led shows without ever losing the groove! They will be supported by Americana singer-songwriter Ryan Bingham! 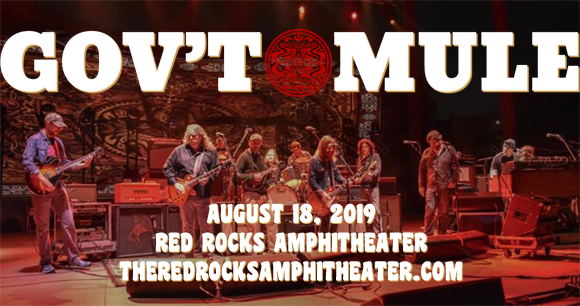 Southern rock jam band Gov't Mule was formed in 1994 by guitarist Warren Haynes and bassist Allen Woody. A side project of The Allman Brothers Band, the group released its self-titled debut album in 1995 – the first of ten studio albums for the band, in addition to several EPs and many live releases (most of the band's live shows are recorded and released). Over the years, the group has made a name for itself due to its sprawling, improvised shows that often feature a variety of notable musical guests, and in additon to its extensive touring schedule, the band is known for being a stalwart of the festival scene. The band's tenth and most recent studio album is Revolution Come… Revolution Go, which was released on Fantasy Records on June 9, 2017.