Indeed, there can only be one Freddie Mercury; but there is only one that can come close — KILLER QUEEN! Queen is one of the most loved and revered artists all over the world. Hence, it takes outstanding musicianship and showmanship to recreate and represent their iconic stature on a world stage. That's what Killer Queen delivers. An uncanny and eerie resemblance to the real deal — fully-garbed costumes, accurate instrumentation, indistinguishable vocal rendition — a total true-to-form killer package that only the band Killer Queen can pull-off. This is definitely a knock-out experience that Queen fans should not miss. Lock-in those tickets now! 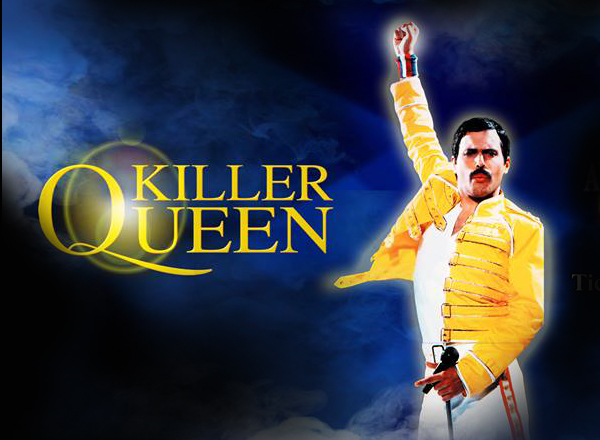 "We Will Rock You," "Don't Stop Me Now," "We Are the Champions," "I Want to Break Free," "Under Pressure," "Another One Bites the Dust," "Somebody To Love," "Bohemian Rhapsody," "The Show Must Go On"…reading this list of songs alone is enough to bring excitement to any Queen fan. Yet, Queen's energetic and charismatic lead vocalist, Freddie Mercury was gone too soon. Many have attempted to capture that distincet sound and Mercury's trademark impassioned and dynamic showmanship. But only a few (or maybe none) could nail it quite like Killer Queen. This tribute band has polished their Queen-act to the letter, and they've created quite a buzz on the world stage. With constant and in-demand tour schedules, Killer Queen has earned the respect and admiration of audiences for their mesmerizingly vivid recreation of the Queen legacy showcase.