Indie rockers Lord Huron are back on the road for 2022 and will be bringing their sensational performance LIVE to the Red Rocks stage! Their two live night showcase has been so popular that the 1st of June is now a sold out show! But don't panic – tickets for Thursday 2nd June 2022 are still on sale! But you'd better hurry – there's no doubt in mind that their second night will sell out just as quickly! 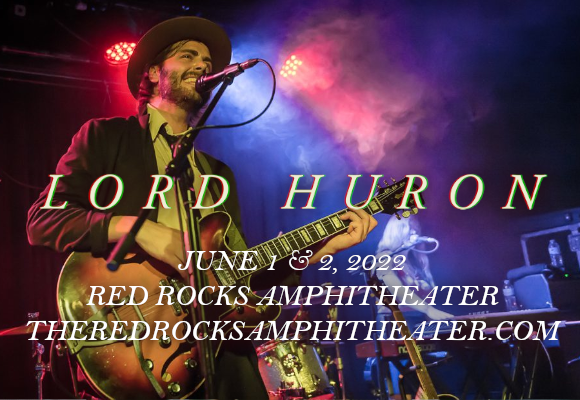 With their groundbreaking single and album releases, Lord Huron have transformed the indie and rock scene with their instantly recognizable sound! Effortlessly produced by the talented musicians Ben Schneider who started the band on the local Michigan scene. Along with added members to the band; Mark Barry, Miguel Briseño and Tom Renaud. With the amazing songwriting from Ben Schneider who spent his early days of creating music, by campfires and as one with nature in woodlands, the Lord Huron sound was born and the band have been busy ever since they first made their debut back in 2012 with Lonesome Dreams.

As they hit the Billboard charts and kick started their career, Lord Huron have also produced incredible music videos all within a throwback vintage style that pays tribute to the western era. This creativity has crafted a unique image for Lord Huron and kept their ever growing fan base captivated on their every move. To follow it all up, they have released other successful albums such as Strange Tails which rocketed on the charts in 2015, both within the US And the UK. As well as this they have released, Vide Noir in 2018 and are set to write and record brand new material soon.

Fans can't wait to catch it all LIVE as they head out on tour for 2020 and stop off for not one but two nights of powerful performances at the Red Rocks venue! Get ready for an unforgettable experience as Lord Huron take to the stage!