Colorado favorites – Lotus RETURN to Red Rocks Amphitheater on Saturday 16th September 2017!
This Fall grab the chance to see the incredible, Lotus LIVE in concert… these guys combine the very best elements of real instruments and electronic to make their unique sound that cannot be described but only heard.
If you have the chance to see them – whatever you do, don't miss out! Tickets are now on sale…. book yours while you can! 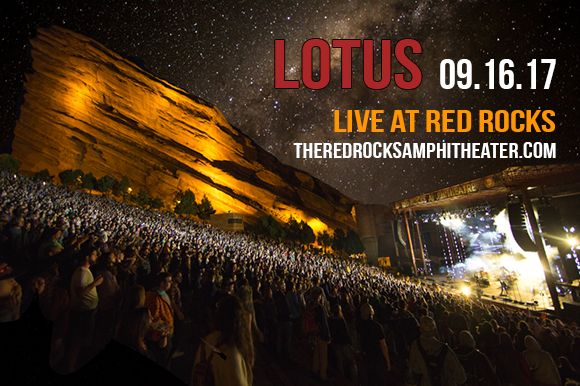 "Sexy and sophisticated dance music, mature enough to be played in the club or the living room"

"Mixing up styles and criss-crossing genres, the singing can be R&B and indie-rock, female or male, songs rock n’roll and electronic alike. With the release of Eat the Light, Lotus has clearly expanded their horizons and harnessed a new vision; sunglasses just may be in order."

Forming in the mid 1990's is the one of the first bands to showcase "jamtronica" – Lotus begun to perform their music, taking inspiration from some of the greats in history as well as the hottest electronic artists on the scene such as The Orb. They shifted from the underground scene to a more world-wide appeal. Since the beginning and with every album release, Lotus are one of those acts that are constantly on the road and Red Rocks is one of the best places to see them. Come and see them perform under the starry night sky this coming Fall!