This coming summer, catch the incredible queen of country – Miss Miranda Lambert as she comes to rock Red Rocks Amphitheater on Tuesday 8th August 2017! The sassy singer will be taking to the Highway to bring fans a truly unforgettable concert experience.

Get ready ya'll as Miranda Lambert performs all of her groundbreaking anthems with her band… this lady is full of surprises and has proven time and time again that she sure knows how to put on a show! Book your tickets while they are still available and add this one to you must-see list for 2017! 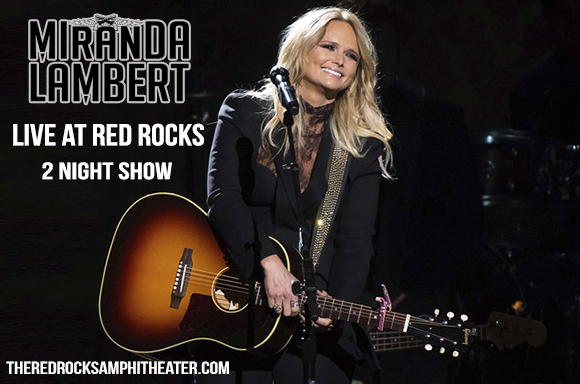 Miranda Lambert has had a successful career since the word go. Her incredible fierce and drive has made her what she is today, known world-wide as one of the biggest Female singers on the Country music scene. Since her debut release back in 2005, with "Kerosene" Miranda has gained countless of awards including; Grammy Awards, the Academy of Country Music Awards, and the Country Music Association Awards. And there's no wonder why, with her enormous crowd jumping hit anthems such as "Me and Charlie Talking", "Bring Me Down", "Kerosene", and "New Strings".

Just two years later, she would smash the charts once again with her second album release which included three massive songs that rocketed her into the number one position for Top 10 Country Hits. Now with five amazing albums under her belt, Miranda Lambert is busy continuing to bring the energy in her show stopping performances across North America and the rest of the world. Be sure to catch her while you can…