Five-pice jamband moe. comes to Red Rocks Amphitheater on Saturday 1st June 2019! This will be the legendary improv-led group's eighth performance at the iconic venue and they'll be performing tunes from their extensive back-catalog at this high-energy show! Joining moe. for the event will be Phish founder member Mike Gordon and four-piece rock band White Denim in support! 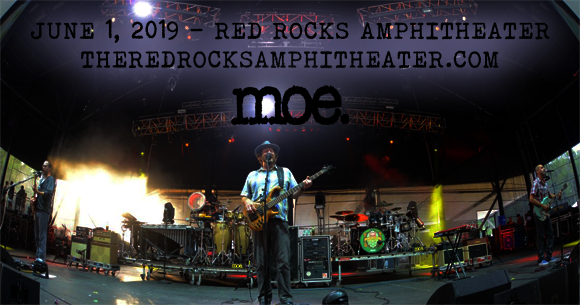 Moe. is an American jam band that formed in 1989 at the University of Buffalo. The group's 1992 debut album, Fatboy, established them amongst the popular improv-rock bands of the day, alongside contemporaries like Phish and Widespread Panic. Known for their extensive touring and loyal fanbase (affectionately called “moe.rons”), Moe. has released 11 live albums to date and regular hosts its own festivals (Moe.lennium, Moe.down, Snoe.down). They have also released 11 studio albums to date, their most recent being 2014's No Guts, No Glory.