Joyful Americana string band Old Crow Medicine Show returns to Red Rocks Amphitheater on Tuesday 31st August 2021 for a night to remember! Fans of the group will know that their Red Rocks performances are lively and eventful, with the Grammy Award-winning group finding the perfect match in the iconic venue! They'll be joined for the evening by special guest act and renowned country singer-songwriter Dwight Yoakham, with support from award-winning guitarist Molly Tuttle! 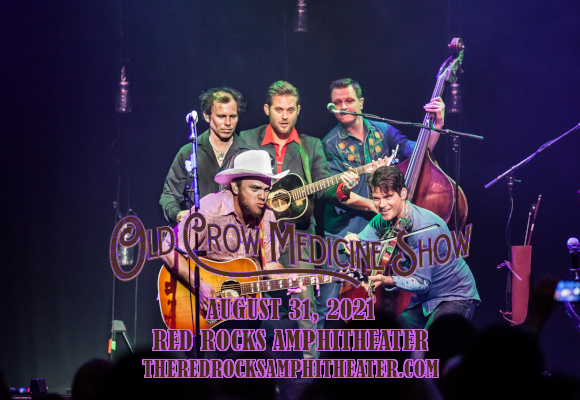 Nashville-based Americana string band Old Crow Medicine Show began in 1998 and was ‘discovered’ two years later by bluegrass musician Doc Watson while they were busking in Boone, North Carolina. Over the years, the band has released eight studio albums, with five of them reaching the top spot on the US Top Bluegrass Albums chart, with two of their live albums also hitting number one on the chart. They are best known for the song Waggon Wheel – a song that was extrapolated from a Bob Dylan out-take sketch called "Rock Me, Mama". Waggon Wheel has since been certified platinum and covered by a number of artists, including Darius Rucker who had a US Top 40 hit with the song and won the Grammy Award for Best Country Solo Performance at the 56th Annual Grammy Awards for his version. Old Crow Medicine Show have won two Grammy Awards: Best Long Form Music Video in 2012 for their involvement in the documentary Big Easy Express alongside  Edward Sharpe and the Magnetic Zeros and Mumford & Sons, and Best Folk Album at the 2015 Grammy Awards for their ninth studio album, Remedy. The band was inducted into the Grand Ole Opry in 2013.