Fans of new wave, get ready to rock!! Phoenix, with support from The Lemon Twigs and Miike Snow, are coming to the Red Rocks Amphitheater on Wednesday 7th June 2017!! Don’t miss out on your chance to catch these phenomenal bands live in the most iconic venue in the world – get your tickets to see Phoenix live TODAY!! 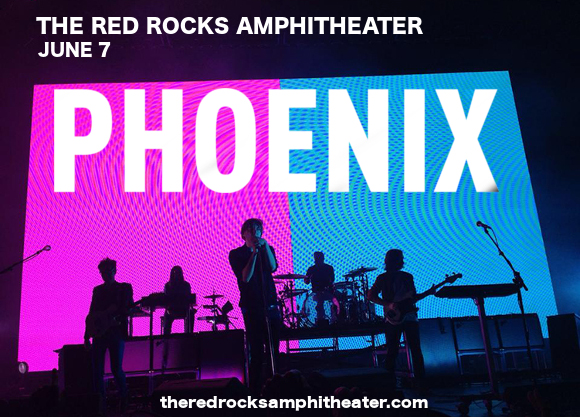 Consisting of band members Thomas Mars, Deck d'Arcy, Christian Mazzalai and Laurent Brancowitz, Phoenix saw their beginnings as a garage band in Versailles, France. Gradually developing a fanbase with their albums “Untitled,” “Alphabetical,” the much-loved “Live! 30 Days Ago” (released 30 days after the end of their last tour) “It's Never Been Like That” “Kitsuné Tabloid” and 2009’s “Wolfgang Amaedus Phoenix,” the band saw their greatest success yet with the much-anticipated “Bankrupt!” in 2013.

The album was released to positive reviews from critics, with Rolling Stone describing it as; "rich with colorful, astral-planing synths, wry guitar shimmer, pillow-pump drums and Thomas Mars' blue-eyed vocal swoon". The album hit number 3 on the French Albums Chart, number 4 on the Billboard 200, and number 14 on the UK Albums Chart. Speaking about the release of “Bankrupt!” singer Thomas Mars spoke of the circumstances surrounding its creation, in particular the success of their last album, their first to be awarded Gold certfification, gaining them a great deal of attention; "At that time, we started talking about success and not music. I guess it was time to protect ourselves and focus on music again."

As Phoenix's most evolved, yet most genuine effort yet, fans can hardly wait to hear where the band’s progression in the years since has taken them to now!! Be a part of the experience – get your tickets to see Phoenix quickly, before they sell out!!