Raise your glass, pour the wine and say 'cheers!' to an effervescent evening of a melange of flavors ranging from jazz, latin, classical, pop, folk, and country music. Get double shots of live music as Pink Martini & Mary Chapin Carpenter share the stage of the Red Rocks Amphitheater on Sunday 14th July 2019. This genre-blending, double-headliner line-up will definitely draw crowds from various musical tastes, as well as fans and followers of artists from both camps. Lock-in tickets to that date so you won't miss this enthralling party. Book your tickets now! 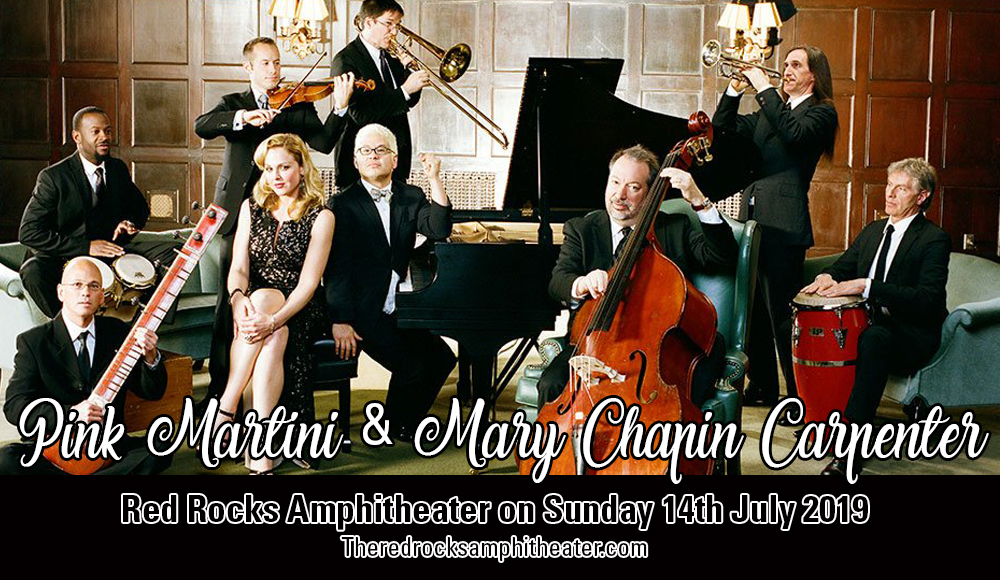 "We bring melodies and rhythms from different parts of the world together to create something which is new and beautiful". That is how Thomas Lauderdale founder of Pink Martini, describes the diversity and the artistic ingenuity of Pink Martini's sound.

Politic's loss was music's gain. Harvard graduate Thomas Lauderdale initially had plans of running for mayor so he was a fixture at political fundraisers, where he found the music underwhelming. With the initial purpose of making political fundraiser soundtracks, he sought his classmate China Forbes to collaborate with him in songwriting. This was the beginning of Lauderdale's “little orchestra” Pink Martini in 1994. They released their first single“Sympathetique”, not expecting that they would become a sensation in France by winning “Song of the Year” at France’s Victoires de la Musique Awards. It was all uphill from there, performing in concert stages in many parts of Europe, Asia, The Middle East, including with the Los Angeles Philharmonic at the Hollywood Bowl, The BBC Concert Orchestra at the Royal Albert Hall in London, and more.

Mary Chapin Carpenter is a singer-songwriter who have a wealth of top hits on tucked in her belt, and with 5 Grammy wins to boot, despite the fact that radio stations were reluctant and used to refuse to play her songs due to strong feminist topics. Mary Chapin Carpenter is a consummate professional artist and a very engaging performer who delights audiences and are constantly raved about by music critics for her unique blend of asserting subject matters she feels strongly about with her brand of coffeehouse folk, pop, and country music sensibilities. She has released 13 studio albums to date certified with gold and platinum marks, and 5 out of 40 singles that have reached top 5 positions in country music charts.

Coffeehouse folk country and jazz orchestra is a heady mix bursting with frothy and bubbling flavors to fill your senses. That's reason enough for you to book your tickets now!