Reggae FANS listen up! There's so much hype surrounding Red Rocks for the summer of 2020! As the incredible annual Reggae On The Rocks returns for another amazing year of fun fulled entertainment! This year the line-up is bigger and better than ever with the likes of; Steel Pulse, Inner Circle, The Green, Israel Vibration, Keznamdi, Judge Roughneck and Rebelution taking to the stage! With brand new bands and legendary acts – it's doesn't get better than this! Book your tickets for Sunday 22nd August 2021 today! 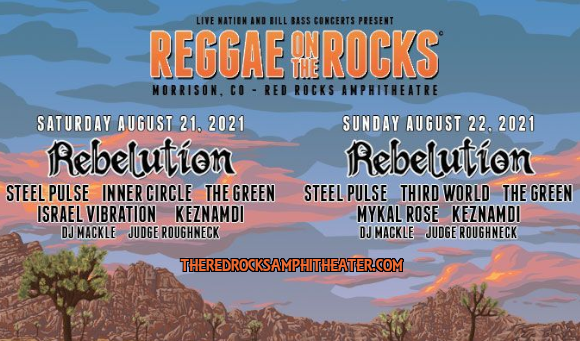 Rebelution have been growing their fan base across the world, as one of the most recent acts on the reggae music list, as they started their career back in 2004 together the Californian group have given their fans plenty of material since they first made their debut on the scene. With their talented members of; Eric Rachmany, Rory Carey, Marley D. Williams, and Wesley Finley they have transformed their career from the underground and local roots music circuit to mainstream success. As they always give a laid back yet uplifting performance where-ever they go, Rebelution are a frequent visitor to the Red Rocks stage and are a firm favorite in Colorado.

Steel Pulse are one of the biggest bands in reggae as they first took to the stage around their hometown of Birmingham, England, the band became known as pioneers on the UK reggae scene with their iconic album Handsworth Revolution released in the late 1970's they gave the UK exactly what it was missing and their unique sound has become influential to the masses. With the famous members; David Hinds (lead vocals, guitar), Basil Gabbidon (lead guitar, vocals), and Ronald McQueen (bass); along with Basil's brother Colin briefly on drums and Michael Riley (vocals, percussion). Together they have showcased incredible and flawless reggae material that has helped to truly put their mark on music history. Their performances today are still as energetic and unforgettable as ever with their vocalist David Hinds leading the band into riveting musical sections and bringing incredible backing vocalists to suit.

Come and catch Rebelution and Steel Pulse along with fellow icons such as Israel Vibration as they take to the Red Rocks stage for an unmissable summer show as part of the Reggae On The Rocks concert! 2020 just got even more special and there's no doubt in mind this will be one of the biggest highlights for the entire year! If you love reggae music or know someone who does, then this is one show that cannot be missed! Secure your tickets and your place in the crowd for an event that you will truly never ever forget!