Big Gigantic is back at Red Rocks Amphitheater on Saturday 25th September 2021 for the second night of Rowdytown IX! The Colorado duo's yearly showcase is the Red Rocks highlight of the year for many, and 2021 looks to be a truly epic occasion with an exciting and innovative 3D Experience from the pair, as well as support sets from PEEKABOO, slenderbodies, and Dreamer’s Delight! As anyone who's seen Big Gigantic perform live knows, these extravaganzas are not to be missed – expect ground-shaking tunes that make you wanna dance yourself breathless! 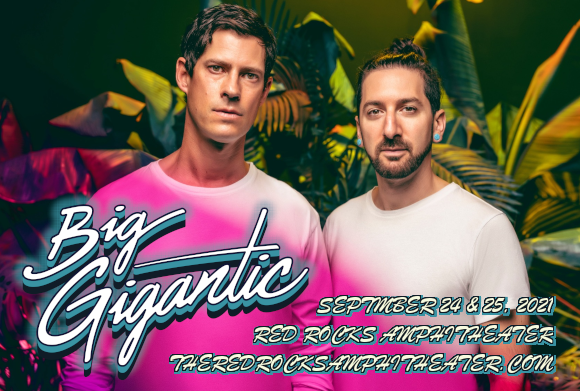 With a focus on improvisation and experimentation, Big Gigantic fuse instrumental hip hop and jazz with electronica to create a vibrant, full-power sound that is made for dancing. The duo, which consists of saxophonist/producer Dominic Lalli and drummer Jeremy Salken, formed in Boulder, Colorado in 2008 and released its debut album, Fire It Up, the following year. The pair has released four studio albums to date, and has become a staple of the festival cicuit, taking to the stage at Lollapalooza, Ultra Music Festival, Hangout, Austin City Limits, Governors Ball, Bonnaroo, Electric Forest, Outside Lands and more, as well as having several Mad Decent Block parties under their belt. Over the years they have also collaborated with several other artists, including Waka Flocka Flame, Logic, Griz, Pell, Hartswick, and Cherub, among others. Rowdytown is the duo's annual concert, which began in 2012.