What a line-up… this is a must-see for any of ya'll Reggae heads as 3 unmissable bands come LIVE to Red Rocks this Summer!
You can catch the well known Californian act – Slightly Stoopid along with support from Iration & J Boog! This is going to be a very special show so be sure to get your friends together for a night under the summer sun/stars… nothing beats hearing feel good music in the outdoors!

Get down to Red Rocks Amphitheater on Friday 18th August 2017 – tickets are on sale NOW! 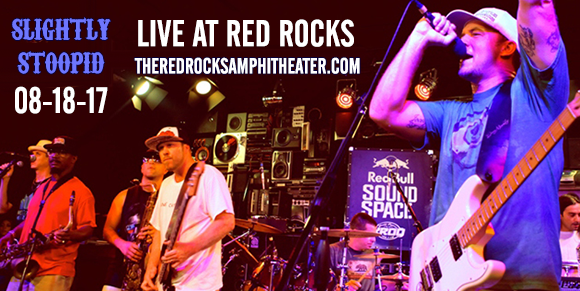 Slightly Stoopid have created a buzz around them since their very beginnings as they combine elements of genre's; Folk, Rock, Reggae, Blues, Hiphop, Funk, Metal and Punk… they are a unique band on the music scene. Because of their fusion sound, they perform with a line-up of all sorts of instruments, so its no wonder everyone wants to catch their live show!

Tours have led them across oceans and around the world, to Australia, Japan, Portugal, Europe and the UK time and time again. And in America, these guys have played some of the biggest festivals such as; Coachella, Harmony, Lollapalooza, Austin City Limits, and New Orleans Jazz Fest. This year they are set to perform at the huge UK festival Boomtown Fair.