Suicideboys are bringing the noise to Red Rocks Amphitheater on Sunday 31st October 2021 and it's going to be one hell of a Halloween! The hip-hop duo are on their Grey Day Tour and not only will they be performing a killer headline set of tracks from their insane back catalog, as well as from their recently released second album, but they're bringing a stacked support line-up with them too! Joining them will be Chief Keef, Slowthai, Turnstile, Night Lovell & Germ! 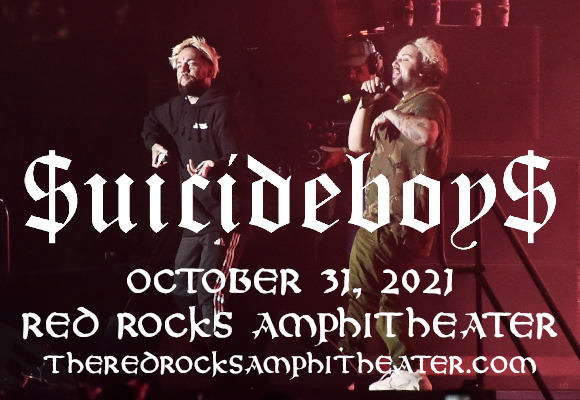 Suicideboys is a New Orleans-based hip hop duo that formed in 2014 and quickly gained a cult following via SoundCloud. Ruby da Cherry and Scrim have released 43 EPs to date, with their 2016 EP Radical $uicide charting at number five on the Billboard Heatseekers chart, number 17 on the R&B and Hip Hop chart, and number 20 on the Independent Albums chart. In 2019 they released a six-track collaborative EP with drummer Travis Barker, titled Live Fast, Die Whenever. Suicideboys’ debut studio album, I Want to Die in New Orleans, was released in 2018 and peaked at number 9 on the Billboard 200. The duo has proven both controversial and hugely popular in the underground rap scene due to their lyrical subject matter, which covers topics not often seen in rap music, such as depression and its symptoms, substance use disorder, and satanism. Their second studio album, Long Term Effects of Suffering, is released in August 2021.