Tech N9ne is coming to Red Rocks Amphitheater on Friday 13th October 2017 and will be bringing his unstoppable energy! The hit making rapper and producer is one again taking to the road to showcase his music to his fans! With not one but two albums out in the same year, this guy has a lot that he'll be bringing with him to represent!! Get ready to catch him LIVE this Fall, tickets are on sale – right here, right NOW! 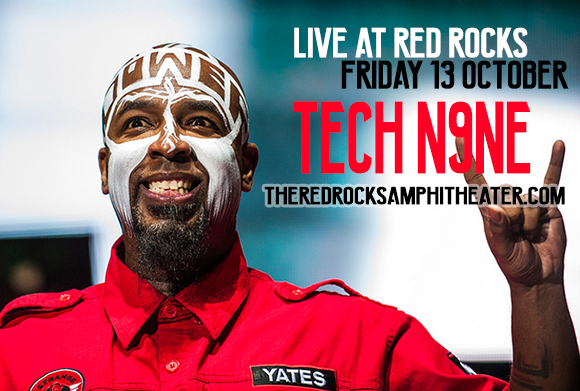 Tech N9ne is hitting the road to celebrate the release of both his latest release and upcoming albums, both from 2017! This exciting news is bringing him to a venue near you, so any fans would be crazy to miss the chance as the excitement is almost too much to handle!

Influenced by the greats, the American rapper has developed his own flow and unique sound known best as the Chopper style. Combining both elements of percussive and instrumental! Old school hip hop underlines his background, with the likes of; Public Enemy, N.W.A, Bone Thugs n Harmony, Eric B. & Rakim, Schoolly D, Biggie Smalls, Just-Ice, and OutKast as his biggest influences. But his favorite music doesn't stop there, he also loves the likes of; The Doors, Pink Floyd, Led Zeppelin, Elton John, AC/DC, Linkin Park, Metallica, Floetry, Slipknot, System of a Down… the list goes on! "I love beautiful music, beautiful music no matter what type".

This open minded approach has set him apart from many on the Hiphop scene – making him a rare performer right now!