The talented, Tedeschi Trucks Band are coming to Red Rocks Amphitheater on Saturday 13th June 2015! Tedeschi Trucks Band are a beautiful blend of blues, rock and soul, led by Derek Trucks & Susan Tedeschi. Susan's raw emotive lyrics and graspy vocal tones make every concert feel like it's just for your ears only! This band is one of a kind, when they perform, they truly mean it. Grab your chance to see them on this mid summers evening… you will be pleasantly surprised! 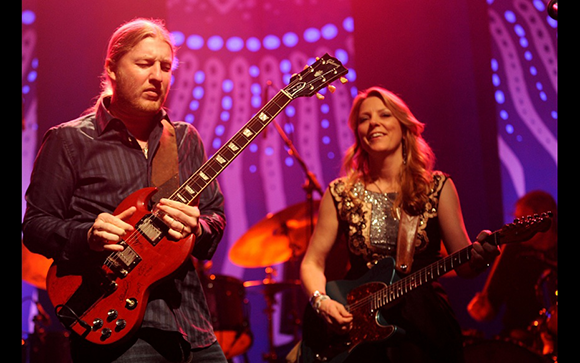 Tedeschi Trucks Band were founded in 2010 by husband and wife, Derek Trucks and Susan Tedeschi as they joined musical matrimony. The 11 piece band play an effortless meld of rock, blues, gospel, and New Orleans funk. Their line-up is surprising with such a varied musical merge of the traditional band set up with the added lush horn section and backing vocalists. The sound that these guys create is gorgeous, it draws you in and for the time that they are on stage, it feels as though time has stood still.

Sharon Jones and the Dap Kings aim to capture the essence of funk and soul music as it was at its height in the mid-1960s to mid-1970s. This comes across in their traditional analog style of recording and energetic live performances. These guys will take you back in time to the disco era, topped with all the glitz and glam – so get ready to get your boogie on!