Are you ready for a massive night of afrobeat, funk, jazz and hip-hop? Then get ready for a treat: The Motet, together with support from the amazing Jurassic 5 and The California Honeydrops, will play the iconic Red Rocks Amphitheater on Friday 2nd June 2017!! Don’t miss out on your chance to party at this gorgeous venue – click the Buy Tickets button above to get yours now. 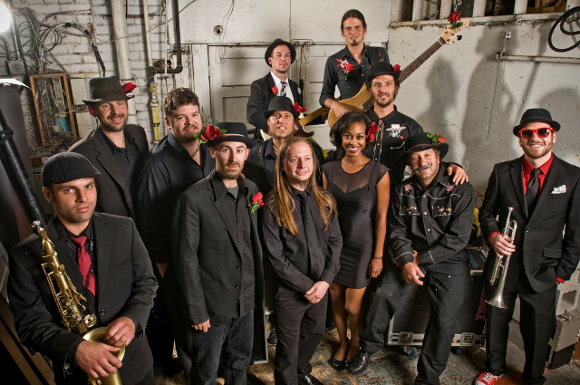 Headlining festivals worldwide and touring regularly with a yearly concert especially for Halloween, The Motet are well-known for the boundless energy of their live performance, which often features special guests so keep your eyes peeled as there are bound to be some announced closer to the time! Their most recent release, “Totem,” of summer 2016 was released to great critical acclaim, with funk media hailing it as; “totally fresh & modern sounding…sublime staccato stabs of bayonet-sharp brass and bedrock bass & drums.” It was a collaborative effort between the main seven members, an impressive display of the extent to which the band are gelled into a cohesive singular musical entity.

Getting you in the funky mood are Jurassic 5 and The California Honeydrops. The former are a 6-piece rap crew formed by four rappers and two disk jockeys, all hailing from previous individual projects and bringing their collective talent together to give you the freshest alternative hip-hop money can buy, while the latter, with their roots in blue and R&B, will treat you to their unique combination of unusual instrumentation, and the very best in rich bluesy vocal harmony.

This will be a night of funk and soul to remember forever. Don’t forget to buy your tickets!!