Due to popular demand, the incredible Vampire Weekend are headed to Red Rocks Amphitheater on Wednesday 9th October 2019 for the second night in a row! The tour supports the release of the band's hotly anticipated fourth studio album, Father of the Bride (their first in six years), which launched the singles “Flower Moon,” “Harmony Hall,” “2021,” and “Sunflower”! Soccer Mommy will be performing in support! 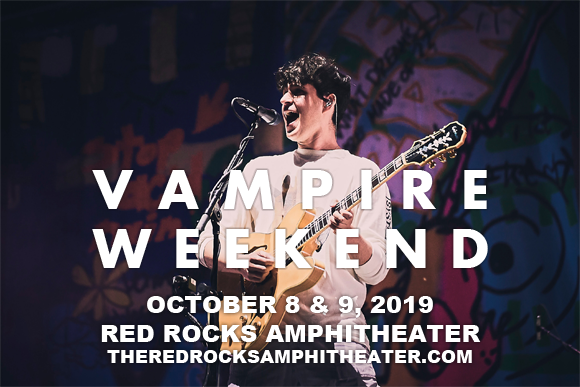 Vampire Weekend is an American rock band that came to prominence with the release of its self-titled, self-produced 2008 debut album. The album went straight in at number 17 on the Billboard 200 and launched four singles: "Mansard Roof", "A-Punk", "Oxford Comma", "Cape Cod Kwassa Kwassa", and "The Kids Don't Stand a Chance". Contra (2010), the album's follow-up, cemented their popularity, becoming one of the year's most talked-about albums and debuting at number-one on the Billboard 200. The band won the 2014 Grammy Award for Best Alternative Music Album for their third record, Modern Vampires of the City (2013). Their fourth studio album, Father of the Bride, is due for release in 2019.