HUGE news jazz fans!! VULFPECK is set to headline the Red Rocks Amphitheater for the FIRST TIME EVER, and they’re joined by none other than legendary saxophonist Kamasi Washington and synthpop duo KNOWER as supporting acts. You can’t afford to miss it!! Get your tickets NOW and then get on down to the world’s most visually breathtaking venue on Friday 27th April 2018 for a truly sublime night of music!! 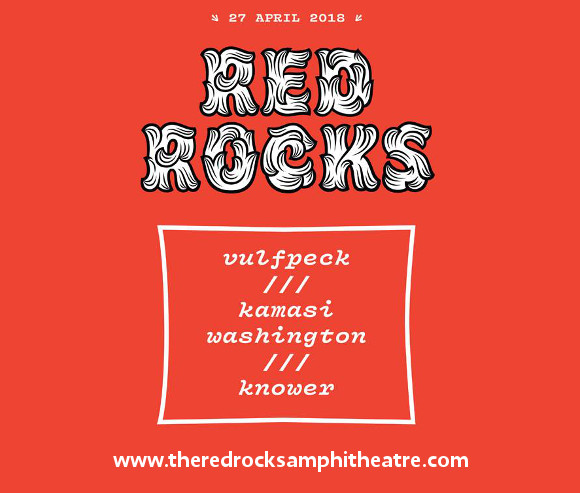 Last Summer, Vulfpeck made their Red Rocks Debut as support for the Trey Anastasio Band, with a truly memorable performance where the Phish frontman joined the funk band for a sizzling version of “Rango” that caused an unexpected jam of “Will You Be There” by Michael Jackson!!

Kamasi Washington, the modern jazzmaster, widely regarded as one of the best in the genre is on tour with his most recent album, “Harmony of Difference”. As for KNOWER, a duo comprised of Louis Cole and Genevieve Artadi, there could be no better opener for Vulfpeck, as the two acts have collaborated many times in the past. With their incredible jazz chords and elements of dubstep mixed with Genevieve’s incredible vocal, they’ll get you up and moving and ready for Vulfpeck in no time!!