Modest Mouse recently dropped their latest single “Leave A Light On”. If you go and follow the light, chances are, you'll find a road leading to the iconic concert venue — the Red Rocks Amphitheater, where Modest Mouse and supporting act Future Islands will be performing, on Tuesday 28th September 2021. This tour is part of their extensive summer to fall US tour, covering a vast range of key cities and states, in support of the release of "The Golden Casket" Modest Mouse’s seventh full-length studio album. Check out the 'Get Tickets' link on this site, as the fastest, easiest, and most convenient way to score tickets to the show. Tickets are on sale now. 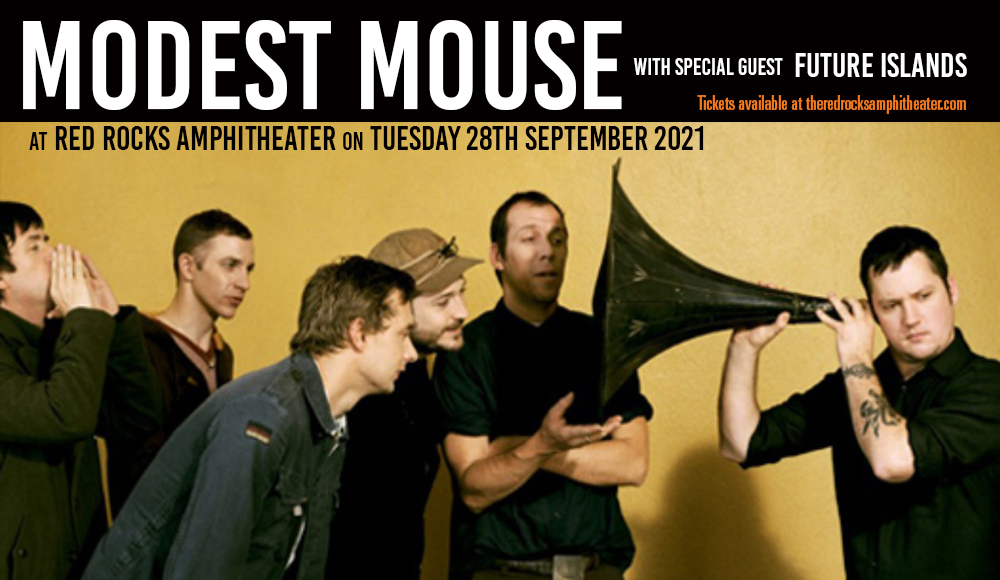 Modest Mouse's founding members lead singer/guitarist Isaac Brock, drummer Jeremiah Green, and bassist Eric Judy got together as a band in 1992 in their hometown Issaquah, Washington. The band has gone through various member line-up changes, but their edgy-emo, art-punk, alt-sound is rock solid to this day.

Modest Mouse had encountered some rough patches during their early years of putting together and releasing their albums. Then it was their 1997 album, 'The Lonesome Crowded West' that jump-started their critical breakthrough that earned them a cult following. To date, it is also considered to be one of the defining albums of mid-1990s indie rock.

The album 'Good News for People Who Love Bad News' from 2004 scale their profile to new and greater heights as the album received a Grammy Award nomination for Best Alternative Music Album, while the hit single "Float On" was nominated for Best Rock Song. Modest Mouse's succeeding album 'We Were Dead Before the Ship Even Sank' enjoyed commercial triumph, being the best-selling album in the United States and Canada.

Modest Mouse also established themselves as a veritable live act with their regular presence in music fests such as the Voodoo Music and Arts Festival in New Orleans, the Beale Street Music Festival in Memphis, the MO POP Festival in Detroit and the Austin City Limits Music Festival, and as one of the prime acts in Coachella 2013.

Now follow the light leading to the Red Rocks stage where Modest Mouse will unleash heady doses of indie-rock. Lock in your tickets now!