EVENT RESCHEDULED TO MONDAY 9TH MAY 2022. Originally Tuesday 11th May 2021. All original tickets are still valid!

From Soundcloud, Russ is ready and raring to make a big leap onto the big concert stage, as he announced that his "Shake The Globe Tour" is very much well underway. He has pulled all the stops, to make this possible, and Russ has locked-in the Red Rocks Amphitheater stage on Wednesday 13th May 2020. Russ is a diy-musician, rapper, songwriter, and record producer. Now he's adding another 'hypen' to his versatile talent as a full-blown concert artist. Watch him explode onstage, and revel on the power of his music. Book your tickets now! 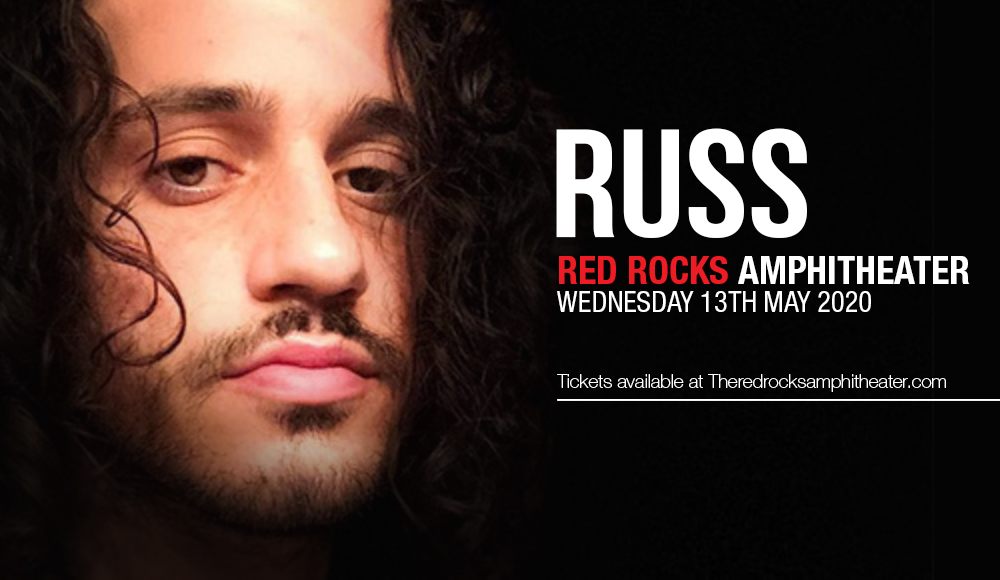 As the saying goes, there's 10 years worth of hard work behind each overnight success. With almost everyone following the path of reality TV promising the shortcut to stardom, Russ deliberately chose the opposite direction and forged his way into a self-made career roadmap. He was a diy music artist who passionately put together literally all the elements of his music, style, and even his marketing and promotion. With digital technology by his side, he is one of the artists who truly maximized the power of a music platform known as Soundcloud. And with his innate genius, he know exactly how he would stand out from an ocean of hungry artists like himself.

"I've been at this shit nine years and now they start to call,” Russ sings on his breakout single, “What They Want.” Russ paid his dues, so to speak, and now he is just starting to reap the fruits of his labor. Russ' initial set of singles were "What They Want" and "Losin Control". These were the starting points; the songs peaked respectively at number 83 and 63 on the US Billboard Hot 100. With this breakout success, Russ showed everyone who's boss. Russ lorded over the charts with the album "There's Really a Wolf", debuting at number seven on the US Billboard 200 and number four on the US Top R&B/Hip-Hop Albums charts. was soon certified platinum. His latest thirteenth studio album, "Zoo", released on September 7, 2018, peaked at number 4 on the Billboard 200.

Treat this concert as a celebration of victory that you deserve to enjoy and be part of. Don't miss the party, book your tickets now!