If you’re a fan of Twiddle, then you can’t afford to miss their first EVER headlining show at the Red Rocks Amphitheater! Featuring Stick figure and The Hip Abduction as support, the massively popular jazz-funk jam band will play their debut Red Rocks headlining performance on Friday May 4th, 2018. Set in the Red Rocks’ incredible atmosphere, this will be a concert experience unlike anything you’ve ever heard before. Don’t delay – get your Twiddle tickets today!! 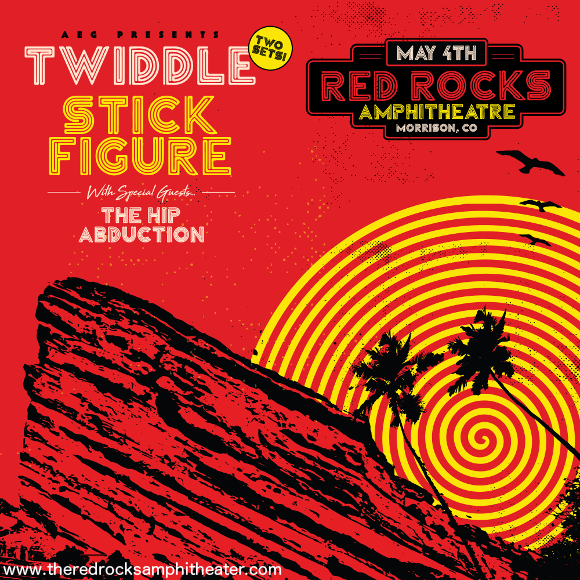 With the Red Rocks Amphitheater a well-known venue for jam acts, with the best bands having played here from Umphrey’s McGee to the Grateful Dead. So for Twiddle, this concert is a truly historic high point in their career. Since their formation in the 2000s, Twiddle have been gaining a steady reputation for their jam skills, showcased throughout 2017 with the release of “PLUMP Chapter Two,” the second half of their double LP, to accompany 2015’s first half (remastered and re-released alongside part two to make a full fresh Twiddle experience!)

As for Stick Figure, they kicked off in 2006 and have been building a devoted following ever since. This will be their second Red Rocks performance since they opened for Method Man & Redman’s 420 Eve On The Rocks show in 2016.

Food, jam music and an incredible atmosphere found nowhere else in the world – what more could you want?? Tickets for this stunning concert will sell fast, so be speedy – get your tickets to see Twiddle NOW while you still can!!