EVENT CANCELLED. We regret to inform you Halsey has cancelled her scheduled 2021 tour. Please request a ticket refund from your point of purchase.

With her confessional lyrics, unique and spellbinding voice, and theatrical, energetic shows, Halsey is one of pop's biggest stars. Managing to embody the glamor and otherworldiness of a star, but retaining autheticity through her activism and championing of social and gender equality, she is a rare breed who has amassed legions of fans over the years. Now, the Grammy-nominated singer comes to Red Rocks Amphitheater on Monday 27th July 2020 as part of her Manic Tour, and the show promises to be as colorful and entertaining as its performer! 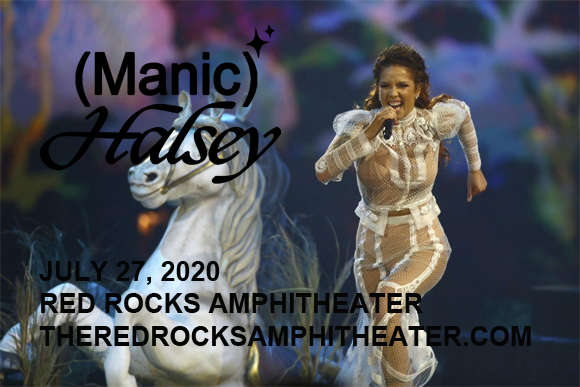 Signing to Capitol-owned electronic/dance label Astralwerks in early 2014, after her self-released single "Ghost" became popular on SoundCloud, singer and songwriter Halsey has become a global sensation with her candid alternative pop. The New York-based performer's debut EP Room 93 was released later that year, and reached number three on the Billboard Heatseekers chart. Badlands, her platinum-selling debut studio album, was released in 2015, launching four platinum-selling singles: "Ghost," "New Americana," "Colors," and "Castle." The following year, she featured as a vocalist on The Chainsmokers' single "Closer", which topped the charts in 15 countries and was certified diamond in the US, making her a household name. Hopeless Fountain Kingdom, her 2017 second studio album, debuted at number one on the Billboard 200 and featured collaborations with Sia, Greg Kurstin, and Benny Blanco. It also featured two top 20 singles: "Now or Never" and "Bad at Love". 2020 sees the release of Halsey's third studio album, Manic, which includes "Without Me": Halsey's first number one single on the Billboard Hot 100 chart as a main artist.