Red Rocks favorites Joe Russo's Almost Dead return to Red Rocks Amphitheater on Friday 5th June 2020 to blow your minds! Kings of the groove, they have levelled-up beyond just a Grateful Dead covers band to become cult favorites in their own right, with a major fan following all around the world! No two Joe Russo's Almost Dead shows are the same, but they always deliver the goods, so get ready to be transformed and transported by these jam-band masters! 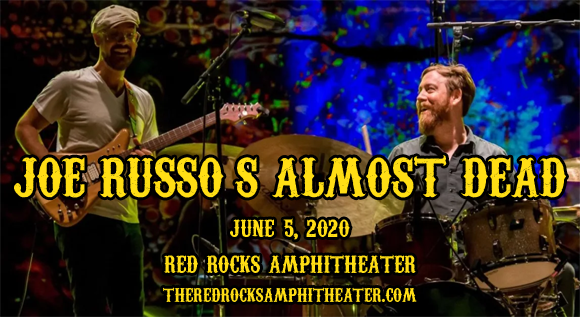 “Not only does this quintet play tight and vicious versions of some of the most complex songs in the Grateful Dead’s repertoire, but they play them with a rawness & energy absent from the stage since the ‘Live’ Dead era. More importantly, all of the jams are wild and incredibly adventurous. Russo’s a beast behind the kit who’s in the peak of his career. Metzger is a criminally underrated guitarist who has a chameleon-like ability to alter his sound to compliment any situation. Dreiwitz’s intensity is unmatched by anyone, while Benevento spouts these crazy tones and layers of sound that mix the best of what each keyboardist in GD history brought to the band. Finally, add Hamilton, whose voice and biting leads help push this ensemble over the top.” – Scott Bernstein, Jambase