Rainbow Kitten Surprise (or RKS as they're known to the fans) have fast been ascending to sell-out success and this marks their second headline night in a row at Red Rocks Amphitheater, on Tuesday 14th July 2020! The band, whose music straddles the lines between indie, alternative, and folk-rock, is not only known for its exuberant and powerful live shows but also its LGBTQ activism, seen most in crowd-favorite songs like “Hide,” which has become an anthem for our times! They'll be joined for the show by special guest support act Mt. Joy! 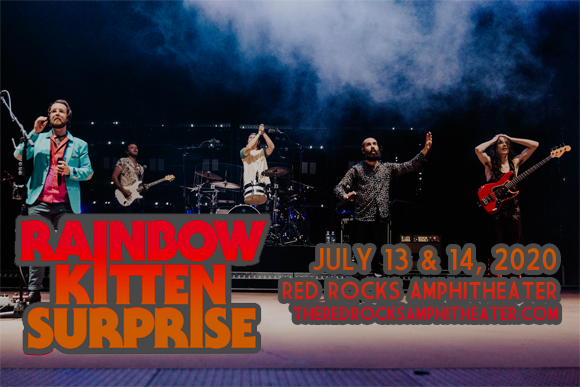 Formed by singer Sam Melo and guitarist Darrick "Bozzy" Keller in 2013 when they shared a dorm room at Appalchian State University in Boone, North Carolina, American alternative indie band Rainbow Kitten Surprise released its debut EP, Mary, later that year. After adding three new members to their group – Ethan Goodpaster, Jess Haney, and Charlie Holt – the band re-released its EP alongside its debut album, Seven, later in 2013. In 2015, the band raised its profile with thew release of a self-titled album (shortened to RKS), and two years later was signed to Elektra on the strength of its releases. The band's major-label debut, How To: Friend, Love, Freefall, was released in 2018 launchign several singles including "Fever Pitch". In 2019, the band released the album Mary (B-sides), which contained a new track – "No Vacancy".